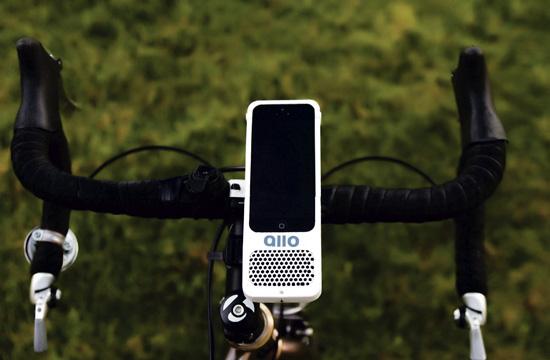 When he isn’t doing his homework, high school student Benji Miller doubles as a young entrepreneur.

Miller, a 17-year old Santa Monica native, has found a solution to promote safer bike-riding by developing a unique bike mount with speaker.

This useful gadget allows bikers to make phone calls, listen to music, get directions, and use other apps on their smart phones safely and efficiently as they ride.

It functions as a kind of touch-screen speaker phone that attaches to the handlebars of the bike, and serves to increase visibility and decrease distraction.

As an avid biker himself, Miller was exposed to the needs of the typical rider and the complete lack of safety that comes alongside using phones while biking.

He started to notice that other bikers experienced similar difficulties and realized that finding a safe way to multi-task while riding would make an everyday mode of transportation much more convenient.

The invention of the Allo bike mount and speaker was a direct result of an effort to alleviate this problem.

“I love this whole movement about making biking better,” Miller said. “A way to do this is to make the use of smart phones safer. It makes for an easier experience when biking.”

The Allo got its name from a combination of two different aspects of its capabilities.

It is a fusion of the Greek god Apollo’s name, as he was the deity of music, and the fact that the invention can perform “all” the functions of a smart phone.

The Allo also has a simplistic, user-friendly design, so any and all bikers will be able to utilize it easily.

After experimenting with several different designs and prototypes, the Allo recently launched earlier this month.

As of now, the bike mount and speaker is only compatible with the iPhone 5.

However, Miller says he will definitely be extending to other levels of compatibility in the near future so that the Allo will be able to serve the needs of all smart phone users. The Allo will potentially also be sold in a variety of colors as well, making a bit of personalization available for bikers.

Miller is very open to customer feedback and willing to take into consideration what people have to say about the Allo in order to improve its performance in his future endeavors.

The Allo is currently part of an online Kickstart campaign to fund the product and therefore requires a certain number of customer backers in order for the bike mount and speaker to officially start being sold.

For mass production to commence, a particular amount of money needs to be pledged on Kickstarter by April 13, as tooling and production are costly.

With a fully functional prototype in place, the benefits of the product are promising. It can currently be pre-ordered online for $40 while limited supplies last; afterward, the production level will increase and the price will rise to $45.

For more general information on the Allo, visit theallobikemount.com.