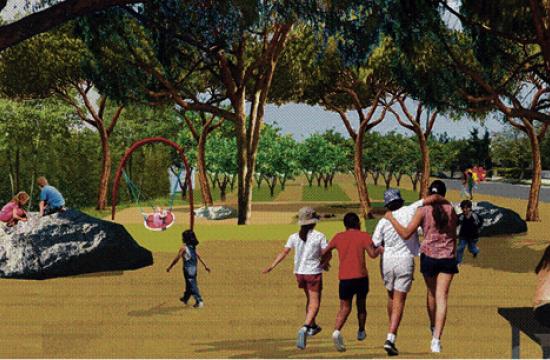 Though the name “Buffer Park” is a work in progress and a new, more permanent moniker will likely be in play by the time the open space is operational, the council’s vote opens the door for the Pico neighborhood to receive a recreational area some stated the area long deserved.

Once built, the new 2.35-acre park would exist facing a residential neighborhood along Exposition Boulevard at Stewart Street and adjacent to the new Expo Maintenance Facility.

According to the report to council members by City staff, Buffer Park will reflect the community desire for continuity interwoven with discrete areas reflecting cultural diversity.

“This approach is captured in the concept of a ‘park in rooms,’” City staff stated in its report. “These small garden “rooms” highlight a specific activity and experience with its own identity yet integrated with the whole park. Visitors could decide to experience only one room and enjoy the park in a smaller, more intimate way or walk through the entire park and each of the rooms to explore more diverse experiences.”

Perhaps the only blemish in the design plans, according to school board member and Pico Neighborhood Association (PNA) co-chair Oscar de la Torre is a place for visitors to barbeque.

“We do want to have space for people to sit and have a barbeque,” de la Torre told the council, adding the methane in the ground at Stewart Park prevents visitors there from recreationally grilling food. “That’s the only element that’s missing.”

The council directed staff to look into how to incorporate de la Torre’s suggestion for a barbeque space into the park’s design plans.

The maintenance yard came attached with the Expo Line.

“It took quite a bit of wheeling-and-dealing and land-swapping to put together this parcel so that we could construct this park for the Pico neighborhood,” McKeown continued. “I’ve helped in the design and construction of quite a few parks in my time on the City Council. Never have I helped in the design and construction of one that I felt was owed so specifically to the people who live very near it.”

McKeown said the City had no say in having the maintenance yard being placed in the Pico neighborhood, but this park would go a long way in giving something back to that community.

The park’s design plans call for eight elements within Buffer Park: the Grove, a dense tree grove; Watershed Garden, where storm water runoff would be collected and treated; Bird Garden, a habitat friendly to the region’s bird species; the Meadow, an open space area ideal for recreational sports or picnicking; Community Pavilions providing flexible spaces for gatherings; Rock Garden, a play area with “naturalistic” play elements; Learning Garden, complete with fruit trees and raised garden plots; and, the Forest, a complement to the Grove on the opposite end of the park.

Construction documents are expected to be ready by October, with the council awarding a contract to build Buffer Park by March 2015.

If all goes as planned, construction of Buffer Park will start in April 2015, when the Expo Maintenance Facility is expected to be complete.

Council member Bob Holbrook was not present at the April 22 council meeting.