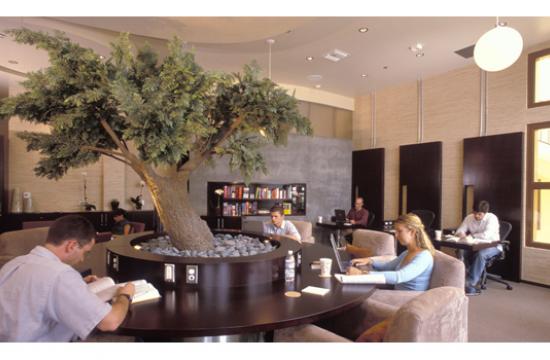 Google opened an office in a famous building designed by the architect Frank Gehry in Los Angeles. Google Los Angeles is located in the Binocular Building on Main Street in Venice, CA. The building has gigantic black binoculars as tall as the building itself. The binoculars are located out in front of the building’s front door.

The tech company’s website boasts that the Binocular Building has two of the coolest conference rooms.

Inside the 100,000-square-foot campus, they also have a climbing wall, outdoor theater used for conferences and movies, pool table, rooftop deck with views of Venice Beach, and a highly trained chef that cooks American all natural cuisine.

Google may have started the way of commercial real estate in West Los Angeles to more of a college campus style community and labeling the area Silicon Beach.

Silicon Valley is known for its hills and valleys. Silicon Beach is known for its beaches. Both are known for large technology companies and startups. As a result, coworking offices have emerged as the new commercial real estate office in the past few years in Los Angeles.

Most coworking offices have a comfortable living room feel with couches, comfy chairs, and desks with electrical outlets for lap top computers.  Many are open 24/7 and supply kitchens stocked with coffee, tea, juice, energy drinks and some have free beer and wine.

Most have meeting rooms available and personal offices for an extra cost. All provide high speed internet, Wi-Fi and offer a month to month membership like a gym.

Tech startups, writers, entrepreneurs, and entertainment individuals work at these coworking facilities as members usually paying month to month. Most individuals work for themselves or for small startup companies. These people are looking for like- minded individuals to co-mingle.

Cross Campus, a coworking business, located in the heart of Santa Monica encourages co-mingling for its members. They provide members with introductions to experts, investors, mentors, advisors and fellow members.  In addition, they have private networking events, members-only classes, seminars, and workshops.

A workspace membership starts out at $350 per month for 24/7 access with limited meeting room access and a mail box with their Santa Monica address.

In March the company relocated from a high foot traffic area in Mid-City Santa Monica near downtown to a quieter location around the corner. The new location has 10,000-square-feet of coworking space.

In the affluent area of Santa Monica is TheOffice™ a quieter, smaller coworking business with mostly professional writer clients. They only have 1,300-square-feet of coworking space located in a highly populated celebrity residential area.  Their space is designed to inspire creativity with a dose of Feng Shui in the interior design. They have seating around an 8 foot Bonsai Tree, ergonomic furniture and Bose headphones available for their members.

Some of their clients include famous writers. They have a wall called “It Was Written Here”.

For example: “The Starter Wife” written by Gigi Levangie Grazier, “NCIS” episodes written by Gary Glasberg, “Land of the Lost” written by Chris Henchy, “Down Came the Rain” written by Brooke Shields, and “Serentiy” written and directed by Joss Whedon are some of the names and titles listed on the wall.

Wade Gasque, the Manager of TheOffice said their rent is not cheap. The small commercial retail space is located across from the Brentwood Country Mart, a high end retail establishment with a lot of foot traffic. Rents in the area cost around $5 per square-foot.

Gasque said they only have 26 workstations that they can rent with 24 hour access. They have an introductory fee of $169 for the first month. The trial members see if it is a good fit for their work habits then the price goes up to the regular monthly fee.

They are limited on the amount of memberships they can sell. However, they have no plans to expand their current location or open new offices, Gasque said. The owner Aleks Horvat, a writer and director did have plans to open new locations in the beginning 10 years ago.  However, he realized that one location is a handful, he added.

Several miles away from the high rent Silicon Beach area of West Los Angeles is WeWork, a coworking office on Hollywood Blvd.  Can you believe they occupy three floors in a high rise building? They are great tenants with beautifully built office space, according to the building Manager Robert Carman of the CIM Group.

WeWork offers a furnished dedicated desk with high speed internet, a kitchen with free coffee, water and beer for their members. Also, there is an arcade room, X-box room, and screening room.  In addition, there is limited access to meeting rooms and editing bays. The cost per month for all this and weekly networking events starts at $350 per month.

WeWork appears to be doing well in the less expensive commercial office location that costs about $3.50 per square-foot compared to the Santa Monica prices that are as high as $6 per square-foot. They have been talking to commercial real estate brokers about expanding in Santa Monica and downtown Los Angeles.

In conclusion, the concept is an easy get in and get out for the individual compared to subleasing an individual office. Another true advantage is that it is open 24/7 similar to the concept of 24 hour fitness which finds no excuse for working or working out.

As a resident of an office building, working after hours usually presents obstacles with the air conditioning, security, and parking. This is no Starbucks but a place you can actually work and collaborate with others. The future of coworking office space may be a fad but at this moment, they are a real convenience.

Listed are a few of the Coworking offices: