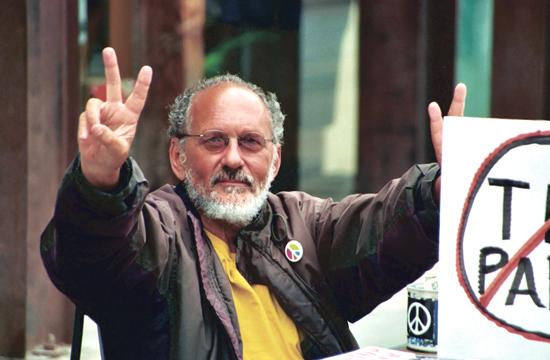 Santa Monica “peace activist” Jerry Rubin has announced he will again be a candidate for Santa Monica City Council in the City’s November 4, 2014 general election. This is the sixth time he will be running since 2000.

Rubin said he is starting his City Council campaign with a three-week liquid-only “campaign health fast” that began Tuesday through Earth Day, April 22 that will consist of juice and herbal teas.

He said his personal fast is not a political protest hunger fast, but a way to prepare himself emotionally and physically for what is likely to be a stressful seven-month campaign.

Rubin said he again pledged a clean and civil election campaign and urged all candidates to conduct their campaigns in a positive and respectful manner with no personal attacks.

Of the seven City Council seats, three will be open in this year’s election.

He said people can also visit his campaign website to see his “Why I Love Santa Monica” listings that he and his wife Marissa will once again start expanding throughout his 2014 campaign.

Rubin said started his City Council campaign on April 1 because that was the date in 2012 when the ‘Save Chain Reaction’ campaign that he co-founded held its first public event, a documentary film screening at Vidiots about Paul Conrad, the three-time Pulitzer Prize- winning political cartoonist and creator of the ‘Chain Reaction’ landmarked peace sculpture in the Santa Monica Civic Center.

Rubin said he will be making support for art, including public art, an integral part of his campaign.

Rubin said he is also a supporter of:

* A peaceful safe City, an environmentally friendly City, a City with excellent schools, and a City that maintains a Triple A bond rating.

* Santa Monica’s positive efforts to assist seniors, people with disabilities and the homeless.

* Development and revitalization of union-friendly hotels and a living wage.

* The ‘Airport 2 Park’ campaign and closing the Santa Monica Airport in 2015.

As Rubin has been on the ballot for City Council six times since 2000 and has never solicited campaign contributions, he said he has sometimes been labeled a “perpetual campaigner” and “not a serious candidate.”

Rubin said he understands that label under a traditional campaign definition, but says all his activism is done in a serious manner, including the numerous times he has entered the Santa Monica election campaigns.