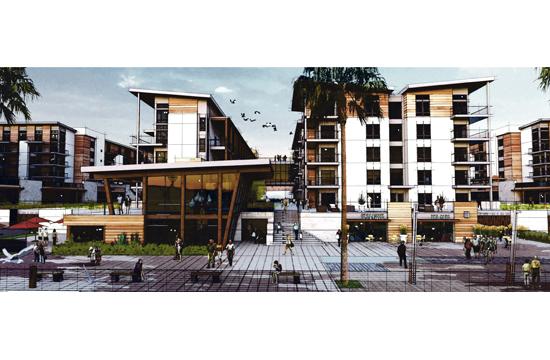 Residents have made progress in at least slowing down a proposed mixed-use project at the old Papermate site and the Santa Monica City Council went on the record at its March 25 meeting stating high-impact development would not replace Santa Monica Airport should it be shut down.

Meanwhile, the Santa Monica Planning Commission held its eleventh public hearing Wednesday night on the Draft Zoning Ordinance, which would govern future development in Santa Monica. Add to this the dozens of active, approved, and proposed developments already in the City’s pipeline.

Of course, Santa Monica is not an island – though the City could well be a “peninsula” surrounded on three sides by Los Angeles.

With respect to the City of Los Angeles, the mixed view on slowing down development within Santa Monica has not necessarily spilled over into the neighboring behemoth of a municipality. In fact, two developers are proposing developments in the City and County of Los Angeles that are in relatively close proximity to Santa Monica.

One developer has proposed to build a 34-story residential tower at 11750 Wilshire Boulevard.

If built, the Landmark Apartment Project, as it is known, would bring 376 multi-family units and a 4,700 square foot commercial building to Wilshire Boulevard in between Granville and Stoner Avenues, or about one mile from Bobby Shriver’s supervisorial campaign headquarters in Santa Monica.

Even more specific, the Landmark Apartment Project is about three-quarters of a mile from Wilshire Boulevard and Centinela Avenue, where Santa Monica and Los Angeles meet.

According to the Los Angeles City Planning Department, the proposed project would add 322,091 square feet of floor area to the 2.8-acre lot; the total size of the proposed 34-story building is 364,991 square feet.

Current designs indicate the 34-story building would reach a maximum height of 338 feet above grade level.

The Environment Impact Report (EIR) states the new project, if built and fully occupied, would add 703 new residents within a mile of Santa Monica. Yet, the EIR also states the project would help the City of Los Angeles maintain an adequate housing supply to keep up with anticipated population growth within the region in the next three years, when Landmark Apartments is set to first be occupied.

The EIR has not yet determined the specific traffic impacts of the Landmark Apartment Project, but it did state the development “has the potential to result in an increase in daily and peak-hour traffic within … [its] vicinity.”

“Once construction is completed, the Project’s employees and visitors would generate vehicle and transit trips throughout the day. The resulting increase in the use of the area’s transportation facilities could exceed roadway and transit system capacities,” the EIR stated. “Therefore, further analysis of this issue in an EIR is required.”

Douglas Emmett Management is the project applicant, according to official paperwork on file with the Los Angeles Planning Department.

Not as close to Santa Monica, but still a nearby enclave connected to the City by Lincoln Boulevard, AMLI Residential has proposed a 585-unit residential unit in Marina Del Rey.

The EIR for the Landmark Apartment Project assumed 1.87 people occupy a residential unit. Using the same math, the AMLI Residential project’s 585 units could potentially add up to 1,094 residents to Marina Del Rey, which might have a direct impact on traffic streets connecting Venice and the Marina to Santa Monica, such as Lincoln Boulevard, Pacific Avenue, and Abbot Kinney Boulevard.

Combined with the Landmark Apartment Project at 11750 Wilshire Boulevard, the two proposed project could add almost 1,800 residents to the south and east of Santa Monica – not factoring in other developments planned for Marina Del Rey, Santa Monica, Venice, or the West Los Angeles area.

According to paperwork published by Los Angeles County officials, AMLI Residential proposes to build six building up to five stories and 70 feet high. The project would also include 8,000 square feet of commercial space, 241 boat slips, and a 1,271-space parking garage.

If realized, the L-shaped development would be located on Via Marina in between Panay Way and Marquesas Way in Marina Del Rey.

As Marina Del Rey is technically an unincorporated section of Los Angeles County, the Board of Supervisors is responsible for determining whether or not to green-light the project.

The Mirror will continue to track these projects and report on the impacts each project would have in Santa Monica.