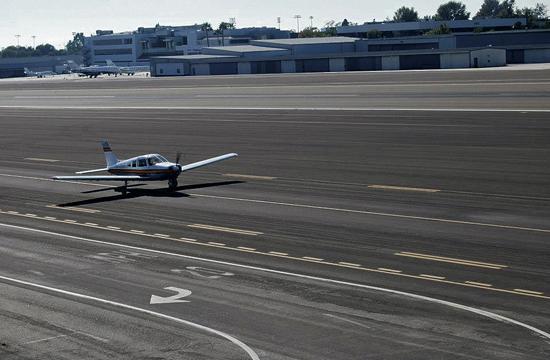 The 2014 Election could prove to be one of the most significant votes in Santa Monica history. Voters could potentially be deciding the fates of two significant properties come Nov. 4: the Hines development at the old Papermate site at 1681 26th Street and Santa Monica Airport (SMO).

A coalition of residents gathered enough signatures in March to call for a referendum to reverse the Hines development agreement (DA) approved by the Santa Monica City Council in February.

Nearly two weeks after the coalition submitted more than 13,000 signatures to Santa Monica City Clerk Sarah Gorman, another three people visited her office March 27 to file a “Notice of Intent to Circulate Petition” to begin the initiative process and challenge the City Council’s plan to potentially shut down SMO as early as next year.

Last week’s filing came less than 48 hours after the Santa Monica City Council unanimously adopted a plan to look into how SMO could either be shut down or have its operations significantly cut.

The initiative could result in a ballot measure, giving voters a chance to amend the City Charter and take the power to decide whether or not the airport land ever becomes redeveloped out of the hands of the City Council.

Accordingly, the process differs from the Hines DA referendum, where the City Council adopted a new law and residents gathered enough signatures to have that law vetoed.

In its filed Notice of Intent to Circulate Petition, the proponents stated the initiative seeks to put the decision of whether the land SMO sits on would be redeveloped in the hands of the voters because council members and special interest groups “have sought to convert the Airport to many different uses, including housing, a campus, a transit center and other schemes that would increase density and create new problems.”

“The City of Santa Monica has stated … it does not have the resources to develop and maintain such a valuable property for low-density use, like a park,” McCollum, Kokatakis, and Yin stated in their Notice of Intent to Circulate Petition. “A City report says that once closed, Airport land would likely be redeveloped for higher density uses, bringing more traffic, noise and air pollution.”

Interestingly enough, Santa Monica Mayor Pam O’Connor and Santa Monica Councilman Kevin McKeown both said at the March 25 council meeting if SMO were indeed shut down, it would remain a low-density project and the land where the airport sits would not be converted into “Century City West.”

Even more, there is a coalition of residents – Airport2Park.org – who seek to have SMO converted into a regional park.

Still, the three petitioners stated in their notice Santa Monica’s leaders could not be trusted to make the right decisions about the future of SMO, hence the City Charter should be amended in order to allow voters to decide the fate of the airport’s land.

“The City’s recent approval of a large high-density development completely disregarded the concerns of nearby residents and the people of Santa Monica,” McCollum, Kokatakis, and Yin stated. “It is clear from [the] statements and … actions [of the City Council] that the politicians can’t be trusted to maintain a low density land use.”

The three petitioners also stated SMO is an economic benefit to the City of Santa Monica. Closing the airport, the petitioner stated, would result in lost jobs and tax revenue.

“Santa Monica Airport and Business Park are low density, valuable community land uses that generate business, jobs and tax revenue for the City,” McCollum, Kokatakis, and Yin stated in their Notice of Intent to Circulate Petition. “Closing the Airport would mean a loss of significant revenue, shutting down businesses, and terminating hundreds of good family-wage jobs.”

It remains to be seen how a potential ballot initiative would be impacted by federal agreements governing SMO.

Upon publication, the initiative’s proponents may begin circulating a petition for signatures.