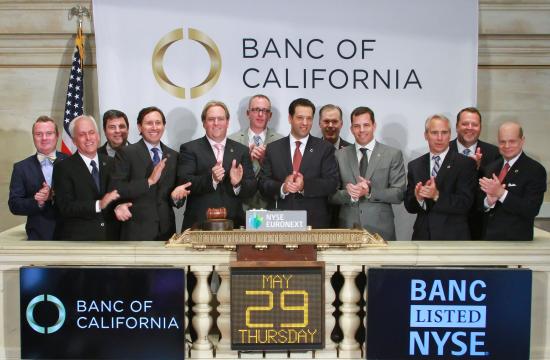 Members of the Irvine-based Banc of California team had rung the opening bell at the New York Stock Exchange (NYSE) on May 29 to commemorate the company’s transfer of its common stock listing from NASDAQ Global Select Market to the NYSE.

With the transfer, Banc of California began trading stock on the NYSE on Thursday morning; its ticker is BANC.

Founded in 1941, Banc of California provides banking services and home loans. In April, the bank announced it would acquire 20 retail bank branches in Southern California as well as $1.1 billion in deposits, $1.1 billion in performing loans, and other assets and liabilities from Popular Community Bank.

Banc of California, which has more than $4 billion in consolidated assets in 80-plus banking locations, stated it expects to finalize and close the deal with Popular Community Bank during the fourth quarter of 2014.