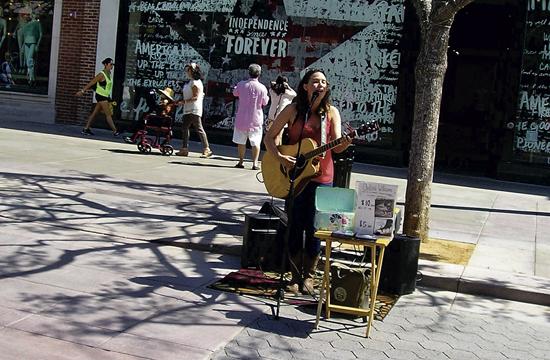 On a gloomy Sunday morning at the Santa Monica Third Street Promenade, Chelsea Williams–a pretty, young barefoot brunette in a peasant dress–sings Leonard Cohen’s “Hallelujah” to her own plaintive guitar accompaniment. Suddenly, amidst the song’s intimate poetic yearnings, the sun comes out, a crowd gathers in hushed tones, and bursts into applause at the song’s conclusion.

For habitués of the Promenade, the instant feels like, if not a minor miracle, at the very least, a very special moment indeed. I have been privileged over the last couple of years to witness many similar moments on weekend mornings (and sometimes afternoons) thanks to this gifted singer songwriter.

As all Southern Californians know, Santa Monica has many landmarks and tourist attractions, from the historic Pier to the upscale Montana Avenue shopping district to the funky boutiques on Main Street to the semi hidden delights of the Bergamot Station art compound to the steps and bike path.

The Japanese have a concept of living landmarks for their most revered artists. Though decades too young for such an official declaration, Chelsea is one living, breathing landmark of Santa Monica that deserves special celebration.

Though still in her twenties, Chelsea has been such a weekend mainstay at the Promenade that she’s probably the only performer to draw people specifically just to see her.

Nathalie Alice, a talented French singer and jazz guitarist and has been friends with Chelsea for years, never ceases to be amazed with Chelsea’s aplomb while dealing with difficult circumstances.

“Street performing is its own odd universe, different from any other venue,” Chelsea said. “You have to be able to grab people who had no intention of being grabbed. That’s why I’ve seen excellent classical guitarists, sitar players and jazz saxophonists bypassed while plate jugglers and basketball dribblers draw big crowds. The singers who make it on the street not only have to have a good voice but must connect emotionally to a random group of strangers on their way to Starbucks or the Gap.”

Chelsea sings with a smile on her face and genuinely connects with people on a level rare for any performer in any venue. And this venue is often absurdly difficult.

Not only do performers have to deal with sudden dramatic shifts in weather (yes, even sunny Santa Monica), but also with a host of unforeseen human and animal interruptions. I’ve seen Chelsea dutifully contend with groups of joggers, plankers, screamers, and barkers (and not always the canine variety) with enormous grace and poise.

While still a Promenade regular, as she has been for more than eight years, Chelsea’s appearances aren’t as frequent as they once were.

Okay, Chelsea does not refer to them as her group, but as much as I admire the singing and playing of the band’s other members, to me, she’s the star of the act.

I’ve teased her that onstage with them, she looks like the sweet girl next door who’s been kidnapped by hillbilly cannibals!

Beyond the tips and the hugs, Chelsea has received a number of positive breaks from her years of singing across from a food court.

A Chevy Cruze commercial showed her on the streets singing Bruno Mars’ “I Want to Be a Billionaire”; an appearance on the “Today Show” with Kathie Lee and Hoda; bookings to open for major acts like Dwight Yoakum; song credit for the blockbuster film “Gravity”; and, for a while, a record contract. (There will be a better one coming in the future for both Chelsea and the Salty Suites).

Chelsea’s best original songs range from the sly and playful “Baddest Man In the Sea,” “8 Days,” and “June Carter” to the haunting ballads like “Siren Song,” “Huckleberry Sky,” and “Here’s To Letting Go” to what sound like pure country pop hits “Stealing Horses,” and “This is Not a Love Song,” and “Goodbye Ojai”.

As Chelsea sets up to play, the familiar refrains begin: “We missed you last week,” “You still have the best voice out here,” “I’ve been watching you for twenty years, young lady,” one elderly bearded man exaggerates.

Maybe one day in the near future Chelsea Williams will be a Grammy winning performer playing arenas and regularly appearing on TV, but even if she just remains the Queen of the Promenade – Santa Monica street singing superstar. She has already realized what others have either forgotten or never known: the real point of music itself is that magical connection between singer and listener.