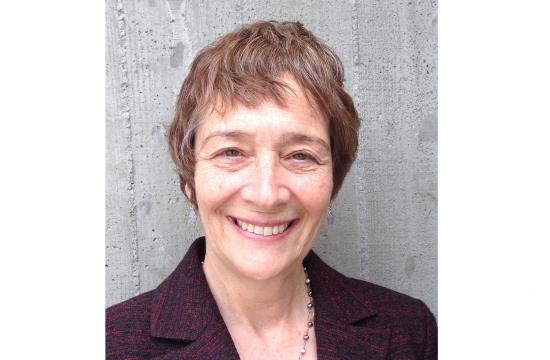 Kate Vernez, speaking about her work with the City of Santa Monica, said, “What I resonate with are collaborations with other people to have a successful outcome and to be purposeful.”

Twenty-seven years ago she and her family left their work and life in New York City to move to California.

Now, Vernez, who is the Deputy City Manager for Special Projects, is leaving her work and making plans for the next chapter of her life.

“I leave the City with a sense of gratitude and appreciation for being allowed to hold the reins for a while,” she told me with great feeling in her voice.

Vernez has worked on many big projects for the City including the creation of the Child Care Master Plan, the Palisades Park Master Plan, and the Telecommunications Master Plan, as well as homeless issues and environmental issues.

She said the most important work of her time is the work to bring Expo to the Westside.

“Expo is the most significant public works project to hit Santa Monica since the building of the I-10 freeway in the 1960’s,” Yaroslavsky said. “The plans for, and construction of, the light rail line could have been a contentious political/neighborhood issue in the city. Kate was able to anticipate problems before they became problems, which allowed us to plan accordingly. Instead of a controversial project, Expo was better received in Santa Monica than at any other point along the route.”

Vernez said Expo was born out of controversy over traffic.

“We brought a coalition together, to weather the ups and downs,” she said. “We achieved something remarkable at the end of the day.”

The City had been planning for Expo for years. There was all the backbone of infrastructure. The City had preserved the Exposition right of way. It had purchased the properties for the Bergamot and 4th Street stations.

Council Member Pam O’Connor was appointed to the MTA Board and made the motion to build the Expo line all the way to Santa Monica.

The City advocated for a third Santa Monica Station at 17th Street. One that would serve Santa Monica College and the hospitals.

The Expo Construction Authority: Santa Monica got State legislation to create a single purpose entity to oversee expenditure of money and construction details for Expo, making sure “the build” is done correctly.

“The 4th Street Station is the terminus for Expo,” said Vernez. “The beauty is that you get off the train to a seamless ribbon connecting Expo riders across to the downtown, to the pier, the beach, City Hall, and the Promenade.

“It’s a partnership: Expo, the City, the community working together to get this built. The community has been involved and supportive from day one. Their willingness to invest in bringing Expo to Santa Monica was essential to the project. You can even see this investment expressed in the response to construction in that there are fewer complaints than would be expected for a project of this size and timeline.

“Because the city had long ago reserved the right of way and had purchased the land at Bergamot and at 4th Street, we were standing in line. And we drew upon our regional partners to write a mobility plan outlining Westside housing density/ridership.

“Bringing all the power sources together to make an incredibly strong advocacy alliance. That was exciting,” said Kate, calling herself a ‘policy wonk.’

“It’s difficult to move on from this work which I have found so meaningful and satisfying,” she said. “But it is the right time to think about the big life changes.

“When my husband and I left our wonderful work in New York City for California, part of why we wanted to move was to be able to have both interesting work and more time for our family.

“Now my eldest daughter and her family live in London. I have one granddaughter and another coming in June and family comes first for me.

“My work in New York and my work in Santa Monica always included working in groups with dedicated people to solve problems and make a difference. Wherever the next chapter takes me I will use my time to be part of projects that make it possible for me to continue to make a contribution.”

When asked about her vision for the future of Santa Monica, Vernez said, “Collaboration and good communications, keeping everyone informed with rich dialogue, attending to people’s needs, getting the job done – that’s what impresses me. We are a small community with a great diversity but we know how to come together and get the job done in a human way.”

By mirrormmg May 9, 2014
in Opinion
Related Posts