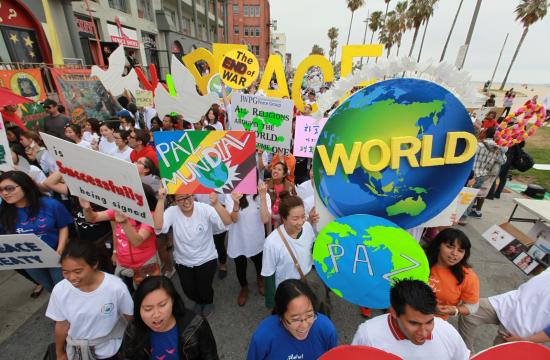 In the wake of the tragic Santa Barbara shooting on May 23, more than 500 students and local community nonprofits marched the streets of Venice Beach on Saturday, May 24 to rally against violence and war.

Hosting the event was Heavenly Culture, World Peace (HWPL), an international nonprofit with a branch in Los Angeles that promotes peace initiatives through culture, arts, policy, and religion for the cessation of war.

“We’re immersed in news of violence and war daily. That’s why today we’re representing one urgent issue: the need to unite and start a generation and culture that believes that peace is possible,” said HWPL volunteer and UC Santa Barbara student Ally Chu.

Chu and 10 other volunteers drove two hours from Santa Barbara to participate in the rally.

The march is a part of a global movement of peace rallies held around the world by more than 200 youth organizations on May 25, 2014, to also commemorate the one-year anniversary of the first International Youth Peace Walk in 2013, which gathered 27,000 youth in Seoul, South Korea to witness the inaugural presentation of the Declaration of World The Chairman of HWPL and author of the Declaration is 84 year old Korean War veteran and peace advocate Mr. M.H. Lee. An excerpt of the document reads:

“We call on all youth to unite in an effort to stop wars and pursue the restoration of peace by agreeing not to fight one another. For World Peace to become a reality, this is the duty of all youth everywhere. The only way to stop the fighting and pointless tragic deaths is to stop fighting. Nobody can ask for anything greater than this, and know that your efforts – the efforts of the young people of the world today in pursuit of peace – will remain as a never fading light of life for all future generations.”

Mr. Lee has traveled to over 73 countries in the last two years and is currently on his 10 World Tour, having visited Washington D.C., New York, Mexico, and Los Angeles this month to speak with leaders and to have them sign the HWPL Peace Agreement.

The agreement, which has been signed by over 300 dignitaries worldwide, is a pledge to work together for peace across nationalities and religions.

In September, Mr. Lee and HWPL will host the World Alliance of Religions for Peace Summit in South Korea, a G20 format global forum of influential leaders from the religious, political and non-profit spheres working for peace.

“With shootings like this in the news, it may be hard to believe in ‘peace,’ but Mr. Lee’s passion and sincerity to end violence and war is gathering leaders and youth together. And that is evidence that peace is possible,” said Chu.