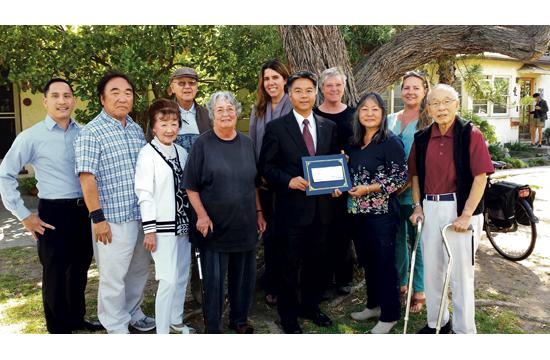 The Venice Japanese America Memorial Marker (VJAMM) reached its goal of raising $100,000 to build and install a permanent monument on the northwest corner of Venice and Lincoln Boulevards, after the April 23 VJAMM fundraiser at Hama Sushi Restaurant in Venice.

On May 20, State Sen. Ted Lieu presented VJAMM members with a check for $5,000 in support of the memorial marker.

The Venice Japanese American Memorial Marker will mark the intersection to which some 1,000 persons of Japanese ancestry, forcibly removed from Venice, Santa Monica, and Malibu, reported with only what they could carry. Over several days in April, 1942, they would be transported from that site to what would become the War Relocation Authority camp at Manzanar in Inyo County, a dusty, four-hour bus ride away via Highway 395. Many would spend the duration of World War II in Manzanar, unless they were drafted into the U. S. Army, removed to the Tule Lake Segregation Center for refusing to answer “yes” to the so-called Loyalty Questions, or volunteered for work furloughs to alleviate the labor shortages around the U. S.