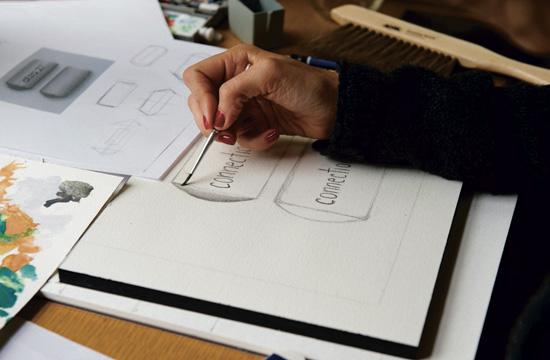 Conceptual artist, author, and psychotherapist Michelle Fiordaliso playfully comments on the use of prescription medication in today’s world in her exhibit “No Side Effects” that opened Thursday at Semi Precious on Montana Avenue.

Fiordaliso said prescription medications for everything from anxiety to ADHD were being dispensed in record-breaking quantities resulting in a multi-billion dollar industry.

“These drugs, while sometimes absolutely necessary, can sometimes contribute to addiction, death due to suicide and overdose, and acts of violence,” Fiordaliso said. “In fact, there are more deaths due to prescription drugs than to illegal drugs. Despite lengthy lists of awful side effects, people are willing to risk that for a quick fix to what ails them.”

The impetus for the show came when a few of Fiordaliso’s son’s teachers suggested putting him on medication for ADD.

The idea for the show further developed when Fiordaliso looked at the cognitive and behavioral processes by which her clients successfully overcame conditions such as depression, chronic pain, impotence, anxiety and insomnia.

In whimsical watercolor paintings “No Side Effects,” Fiordaliso said she suggests alternative paths to achieving the same results as certain prescription medications without any side effects.

“In words and pictures, the paintings are clever, thought-provoking and intended to start a conversation about whether there might be a safer and more efficient way to health and happiness,” she said.