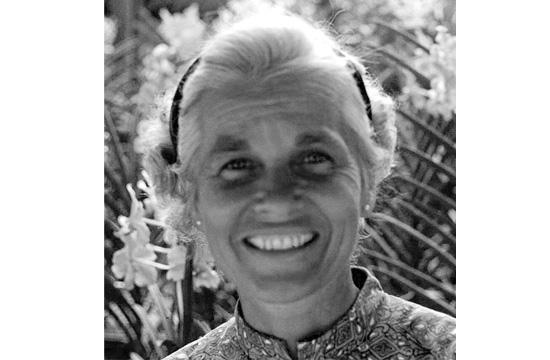 Dorothy Green, beloved mother and grandmother, died peacefully in her home in Malibu, surrounded by her family, on April 7, 2014, at the age of 94.

Born August 14, 1919 in Canada, she grew up in Iowa and moved to California after meeting and marrying Chuck Green.

Their 67-year marriage lasted until his death in 2011.

Unable to attend college during the depression, while raising their two children in Santa Monica, she attended Santa Monica College and earned her BA from UCLA.

Then Chuck changed careers and joined the Foreign Service. They lived overseas in Colombia (twice), the Dominican Republic, Peru, Vietnam, and Indonesia. Dorothy willingly moved from place to place.

She was always the first to say yes to a new assignment and never complained even when they were assigned to go to Vietnam during the war. Chuck said he would only take the assignment in Saigon if his wife could go too, so she was one of a small number of wives who was allowed to go there during the war.

She volunteered or worked in each country where they lived. In Colombia she worked in a childcare center and the bi-national center library. In the Dominican Republic she worked in an orphanage.

In Vietnam she began working for the IRS, whose agents were chasing war profiteers. Later she joined the Drug Enforcement Agency during a time when large amounts of heroin were being shipped illegally through Vietnam to the US.

In their second assignment in Colombia, she continued to work for the DEA when Colombia became the center for cocaine and marijuana. When stationed in Indonesia, she taught English, administered the TESOL exam, and volunteered with student exchange programs.

A true adventurer, she was a fearless traveler who made friends all over the world. She took packs of teenagers every weekend to the beach in the Dominican Republic; managed to navigate scooters, cabs, and buses while mastering driving on the left side of the streets in Jakarta; and spoke fluent Spanish and Indonesian.

She and Chuck were among the first to travel to China when it opened to tourism.

Another of her amazing solo adventures was an open-boat voyage up the Mahakam River in Borneo, where she visited the Dyak tribes.

Dorothy was a natural and talented athlete. Growing up, she danced tap and ballet, rode horses, did gymnastics, and enjoyed roller and ice skating. She loved tennis and swimming. Living in Malibu, she walked from Point Dume to Trancas once a week, and swam for an hour a day, into her mid-eighties.

Her passion for education was expressed through helping both children and grandchildren pay for college and graduate degrees. An avid reader, books were everywhere in her home and wherever they lived she started a lending library. The complex where they lived in Malibu still has a “take one-leave one” library bearing her name.

She preferred reading, travelling, being with friends, and going to the beach to cooking and cleaning.

She was a terrific mother – always sunny and full of fun.

Her flexibility and tolerance extended to allowing exotic pets, including snakes and monkeys, to join the household. She never scolded or spoke in anger to teach her children and welcomed others outside the family with the same remarkable smile and kindness.

She loved people and invited any and all into her home – including many “adopted” extra kids of all ages along the way. When it rained, she would bring home workers who were homeless from the Malibu Labor Exchange to keep them warm and dry.

She and her husband, Chuck, were always supporters of the Y. Every summer would find her sweeping out tents and helping set up the Y camp, and she would be there to clean up at the end of the season.

The world is a better place for her boundless love and generosity.

Dorothy is survived by her son, Terry and daughter-in-law, JoAnn of Santa Monica; her daughter, Marilyn and son-in-law, Larry Jones of Moorpark; four grandchildren; and many nieces, nephews, in-laws and friends around the world.

The family would like to express its deep appreciation for Dorothy’s caregivers, Ester Tenebro and Rose Tallo. They served her faithfully for many years and showered her with patience, dignity, and love, for which we will always be grateful.

A celebration of her life will be held at 11 am on June 14, at the Malibu United Methodist Church, with lunch to follow. In honor of her love of education, memorial donations to a scholarship in her name may be sent to the Santa Monica College Foundation, 1900 Pico Blvd. Santa Monica, 90405.