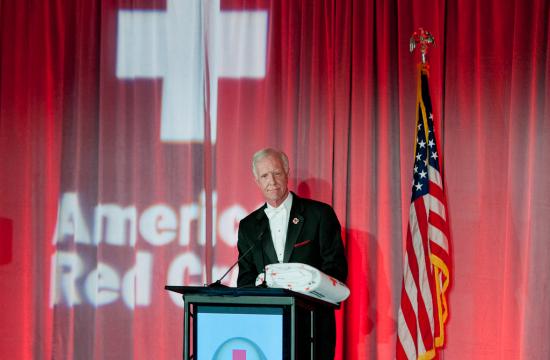 The sold-out event brought together and honored heroes from all walks of life, even some of them with four legs.

Captain Chesley B. “Sully” Sullenberger, the miracle on the Hudson pilot, was honored with the Spirit of the Red Cross award.

In true humanitarian spirit, Captain Sully gave credit to his co-pilot and his crew, who he said played an integral part in the safe landing and evacuation of all passengers.

Upon receiving his award, Captain Sully commented about that frigid cold day in January, with all of New York and New Jersey embracing him with their warmth, it was the American Red Cross volunteers who embraced him with their blankets; they were the first people he saw after he was rescued.

The Crystal Cross Award for Outstanding Support of the American Red Cross was presented to the cast and executive producers of “The Voice.”

The Rick Crocker Spirit of Volunteerism Award was given to the UCLA People Animal Connection, one of the most comprehensive Animal-Assisted Therapy and Activity programs in the nation.

PAC volunteer teams (consisting of the canine and his/her human partner) offer companionship and warmth to more than 900 critically ill children and adults per month. On hand to help accept the award were Charley, Harley, and Logan, PAC dogs who barked and wagged their tails on cue and brought smiles and cheers from the packed ballroom.