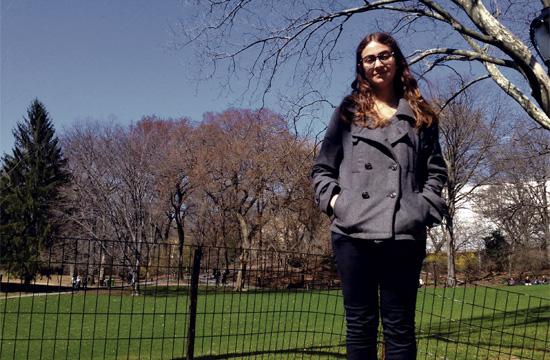 On the final Monday morning of February 2013, a handful of members of the Westboro Baptist Church took to the streets of Santa Monica and briefly protested in front of Santa Monica High School. The Kansas-based organization believed Samohi’s policy of being accepting of those in the gay and lesbian community was a little too friendly.

The event caused a Samohi student to capture the “unusual experience” on camera. What came of it was a nearly seven minute documentary film delving into the student response to Westboro Baptist Church’s protest.

That student, Alana Feldman, presented her film, “Freedom From Fear: The Westboro Baptist Church at Santa Monica High School,” on April 30 at the 2014 Archer Film Festival in Century City. She was one of two high school students from Santa Monica to present a film at the festival put on by the Archer School for Girls in Brentwood.

Featuring perspectives from members of the Gay-Straight Alliance (GSA), Feldman, currently a senior at Samohi, spent a few minutes chatting with The Mirror in a discussion about how the film came about and what remains ahead for her.

What made you want to pick up a camera, capture the Westboro Baptist Church (WBC) story, and narrate that story in film format?

Alana Feldman: I decided to make this documentary because I thought it was such an unusual experience. When I first heard that the WBC would be coming to protest us, I knew I wanted to document it in some way. As the story got more and more extraordinary and so many people got involved, I saw the chance to make a truly unique nonfiction film.

How does this documentary help bring attention to the GSA?

Feldman: One of the central goals of the documentary was give a voice to people who aren’t always heard. Our GSA is such a small presence at our school, most kids don’t even know about it. I want the voices of queer youth to be heard, whether it’s at my own school or across the country.

What about Westboro Baptist Church? What kind of attention does “Freedom From Fear” bring to the organization?

Feldman: When we introduced the idea of a counter-protest, it was met with a lot of opposition because people thought we shouldn’t even acknowledge them.  For us, it was never about their message or their presence, it was about our message and our presence.

How supportive was the Samohi community?

Feldman: Overall, the Samohi community was super supportive of everything. My film teacher, Bill Wishart, was very supportive of my artistic intentions and gave me lots of guidance during the editing process.

What is next up for you? Where are you headed after Samohi?

Feldman: Next year I will be attending Columbia University with a major in Film and Media Studies. Filmmaking is my passion, and I hope to one day work in the industry. I am particularly interested in nonfiction film, and the way that it relates to my other intellectual interests.

So does that mean more documentaries from you are in store?

What about the film? Where is the film headed after the Archer Film Festival?

Feldman: After the Archer Film Festival, my film will be featured in the Los Angeles Student Media Festival. Then later in May is the Santa Monica High School Film Festival, of which I am a coordinator and have been working on a year.