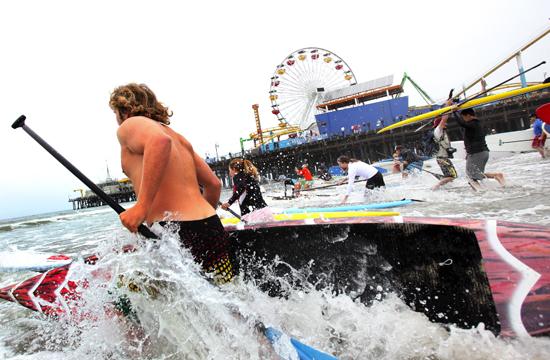 The world famous Santa Monica Pier announced on May 19 that Tommy Bahama, the popular beach lifestyle brand, will return for the second year as the presenting sponsor for the fifth annual Santa Monica Pier Paddleboard Race and Ocean Festival taking place on June 7, 2014.

“Tommy Bahama has always been right at home at the beach”, said Rob Goldberg, Tommy Bahama SVP of Marketing, “but add the Santa Monica Pier and Paddle boarding and it’s pure magic. This event represents everything we revere: a great community in Santa Monica, an iconic landmark like the pier and some spirited competition in the water. Our experience here has proven to be an incredible platform to engage our loyal local following. We’re very excited to be back.”

“We’re so happy that Tommy Bahama is back for another year as our partner,” said Craig

Hoffman, Director of Partnership & Development. “We all had a great time working together last year and it is a great fit both in terms of the demographics of the event and a shared commitment to high-energy good times.”

The 2013 Pier Paddle stood out for having the largest surf of any of the previous years when an uncharacteristically large summer swell sent 10-foot waves crashing onto Santa Monica Beach. The huge surf cranked up the excitement for participants in the events, and for the thousands of spectators who lined the pier screaming with excitement every time competitors came in or out through the surf zone. The swell peaked just in time for the Tommy Bahama Cup, a relay race that required teams of four to sprint out through the surf, around a short course of buoys and back to the beach as quickly as possible before handing off to the next team member.

“The Paddleboard Race & Ocean Festival is a really special signature event that blends the Pier’s long history with contemporary trends in action sports and fitness,” said S. Jay Farrand, administrator of the Santa Monica Pier Corporation. “Between the entertainment, the family activities and the epic competition, it really takes advantage of the whole environment.”

This year, the all day event takes place Saturday, June 7, 2014 and will feature an expanded slate of new events, including, most notably, a multi-round Tommy Bahama Paddlecross competition where racers sprint out through the surf, around a short quarter to half-mile course, and back to the beach. The top half of each heat moves forward in elimination rounds until one racer in each class is champion.

On the pier deck, manufacturers will show off the latest in paddleboards and equipment.

Monica sport in the 1940s with two paddleboard clubs headquartered on the pier. Hula dancers will perform throughout the day. Live music and an awards ceremony will follow the completion of the races for the top finishers in each of the divisions.