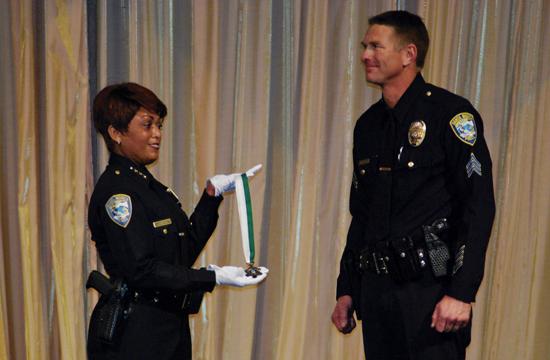 Several local dignitaries and city leaders joined members of local law enforcement and first responders in recognizing the work of officers, dispatchers, cadets, and police staff who served the Santa Monica community – particularly those who were involved with the tragic series of events surrounding a lone shooter’s rampage around and at SMC on June 7, 2013.

This marked the first time SMPD and the SMC Police Dept. jointly recognized its respective officers and staff.

“Today is about recognizing the law enforcement heroes of Santa Monica. They understand what must be done,” SMPD chief Jacqueline Seabrooks told the estimated 300 people in attendance on Wednesday morning.

Seabrooks also rhetorically asked, “What is a hero,” adding many people she asked prior to the awards ceremony answered with one of many popular Marvel or DC Comics character such as Superman, Batman, and others.

In answering her rhetorical question, Seabrooks said, “they walk amongst us, not really whittled down to a … [character in a] film or a defined phrase.”

Representing the City Council, former mayor and current council member Bob Holbrook said the people of Santa Monica are resilient and the officers of SMPD have always been equipped to handle whatever crises come their way.

“We have an incredible police force. Santa Monica is a resilient city … [and] is incredibly courageous,” Holbrook said. “On June 7, tragedy struck Santa Monica. That day and going forward, we came together.”