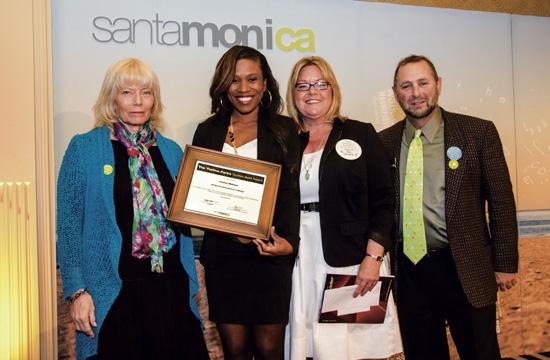 The summit, held inside the Fairmont Miramar Hotel’s ballroom, examined Santa Monica tourism’s accomplishments over the past year.

At the summit, the results of the 2013 Santa Monica Tourism Economic and Fiscal Impact report were released. The report highlighted several important changes to Santa Monica’s visitor profile within the past year.

The report, which has been conducted on an annual basis since 1983, revealed that visitors to Santa Monica from outside the United States remained steadily above 50 percent, an important balance to maintain as international visitors tend to stay longer, use public transportation, and spend more money during their visit.

Also notable were figures revealing that tourism jobs in Santa Monica increased 5.6 percent to 12,908, and that overnight visitors to Santa Monica rose 5.2 percent from 2012 to 2013.

“We are converting day visitors to overnight visitors, which is clearly illustrated in the steep increase in Transient Occupancy Tax, up 7.6 percent from last year,” Kerns said. “This generated $42.3 million to our city’s general fund, providing critical funding to our city’s schools, parks and fire and police departments, allowing for many other services for our residents. These numbers, supported by figures showing that both the number of jobs supported by tourism and total visitor spending reached record highs in 2013, makes it clear that tourism is an essential aspect of Santa Monica’s thriving economy.”

For the first time, attendees had the opportunity to participate in one of two breakout sessions at the summit. One session highlighted Santa Monica as an emerging tech destination, while the second focused on SMCVB’s international sales and marketing opportunities.

During the summit, JW Marriott Santa Monica Le Merigot’s Front Desk Manager Jessica Mahone was honored with the Thelma Parks Tourism Spirit Awards for her contribution of exceptional service in the hospitality and tourism industry.

She was awarded a $1,000 scholarship and a hotel stay at Palihouse Santa Monica, provided by SMCVB and the Santa Monica Chamber of Commerce. To learn more about the Thelma Parks Tourism Spirit Awards and to submit nominations, visit www.santamonica.com/spiritawards.

By mirrormmg May 16, 2014
in Uncategorized
Related Posts