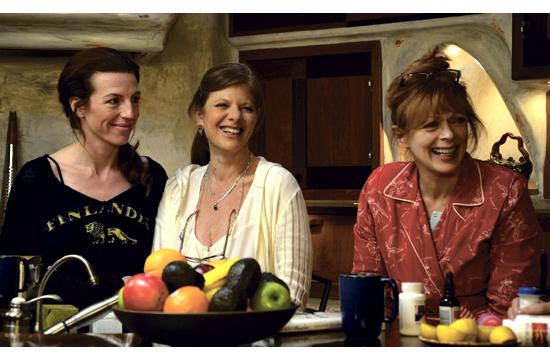 Santa Monica resident and established actress Tanna Frederick has a variety of films and productions under her belt – but her success and fame seem to have taken absolutely no toll on her humble, friendly, and down-to-earth nature.

Raised in Iowa, Frederick grew up in a town in which the arts thrived. Her acting abilities were nurtured in a children’s theatre, where the youth put on four to five shows a year. She remembers not only the acting, but also the smell of the theatre. She recalls painting, building sets, and essentially growing up onstage.

It was within this community that Frederick learned self-discipline and individual responsibility as a young actress. As a result, Frederick possesses a genuine, sincere love for acting.

“It was never for fame or for money,” she said. “Acting is what I have always loved and what I will always love to do.”

Although she graduated with a college degree in pre-law international relations alongside theatre, Frederick decided on taking the road less traveled after receiving some insightful advice.

In 1999, Frederick moved to Los Angeles to pursue an acting career. Unsurprisingly, she was recently wed to legendary director/filmmaker Henry Jaglom, who shares in her love for the performing arts. Though she and Jaglom have now joined forces and collaborated on six films and eight plays, Frederick’s initial jab at communicating with the renowned director in 2003 was a little less than glamorous and makes for an amusing story.

“I was pounding the pavement hard,” Frederick said. “I was trying to get my name known.”

As a waitress at three different restaurants and an actress in a play at the time, one of her cast members advised her to write to Jaglom since he hired off of letters.

The letter was based on how much she loved “Déjà Vu,” a Jaglom film that she had never watched. However, it was this letter that jumpstarted her connection with Jaglom and catalyzed the impending whirlwind of events. Upon the reading of the letter, Frederick ended up being invited to one of Jaglom’s movie screenings after “somehow making it through an hour-long conversation,” despite having never watched the movie she wrote about. It was during the screening that Frederick had a sudden revelation.

“I started bawling about a fourth of the way through the movie,” Frederick said. “The film went into my heart and under my skin. I somehow knew that I was on the right path and this was where I was supposed to be.”

However, Jaglom would not see Frederick’s acting for another year. Frederick only acquired an office job with Jaglom, putting up posters and promoting his works. Her big break came when she took the initiative to pitch his “Safe Place” script to local theatres to be produced as a play.

After showing her resilience and work ethic by pitching the script to 14 different theatres, Frederick’s work paid off when the Beverly Hills Playhouse eventually decided to produce “Safe Place.” Frederick ended up running in this play for 9 months, developing her acting skills and her appreciation for the art.

“A lot of people think I had it so easy, but everything in this industry takes so much effort,” Frederick said.

Jaglom would constructively criticize her and the other actors during intermissions, emotionally jarring them, but in the long run, helping their performance abilities.

“It was good that I went through all that difficulty,” Frederick said. “I was able to experience the whole gamut of emotion and creativity.”

Frederick’s sharpened ability and enhanced confidence landed her a role in Jaglom’s “Hollywood Dreams” in 2005. The connection she and Jaglom had collaborating on this project resembled that of two little kids on a playground. He also served as a wonderful mentor through the years.

“Some people just click creatively,” she said. “He definitely thinks more of me than I do about myself. I tried to learn as much as I could from him.”

Her yearn for more professional knowledge and experience not only is telling of her love of the arts, but also leaks through her advice for aspiring actors and actresses.

“Act as much as you possibly can,” she said. “Keep your survival job to make ends meet, but keep your eyes on the prize, too. Make it as fun as possible.”

As challenging as many of her Hollywood experiences were, Frederick humbly maintains how fortunate she is to have the job that she has.

“Actors have one of the luckiest professions,” Frederick said. “To create art is to provide a service.”

Her future plans include directing a film for the first time this upcoming September, starring in a movie set to be filmed in Zurich, and returning to her roots through acting in a local production in Iowa.