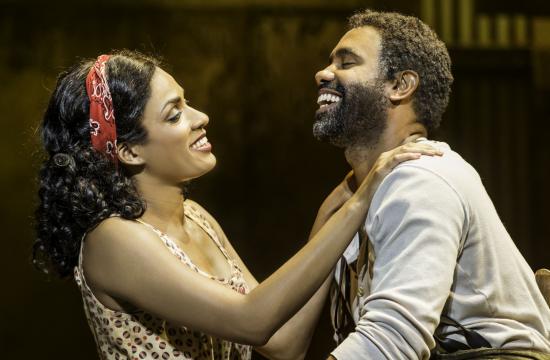 For those of you who are purists and would prefer to not see this ground-breaking American folk opera fiddled with in any way, you may very well have problems with the American Repertory Theater’s version of “The Gershwins’ Porgy and Bess,” on stage at the Ahmanson Theatre.

This production, directed by Diane Paulus, with the book adaptation by Suzan-Lori Parks, and the musical score adapted by Diedre L. Murray, takes a somewhat radical turn from the original production, which premiered to mixed reviews in September 1935.

It was the first opera to draw upon American roots music, incorporating blues and jazz, infusing the sound with African-American* spirituals. While being somewhat of a purist myself, I try to be open to variations on a theme with respect to the artistic interpretation of old chestnuts and in this case, found the work, while not absolutely perfect, to be quite exhilarating.

The play begins with the iconic “Summertime,” beautifully sung by Clara (Sumayya Ali) and Jake (David Hughey) in a setting creating the tone for the ensuing action, which takes place on Riccardo Hernandez’s effective replication of Catfish Row, a tenement in a dock area in 1930s South Carolina.

With Christopher Akerlind’s complementary mood lighting enhancing the range of emotions pouring forth from the stage, it should be noted, that each member of this truly outstanding ensemble, with highly trained vocal instruments, could easily sing any kind of music, ranging from opera to R & B to blues, as demonstrated by their performances in this compelling production.

The story revolves around Bess, a woman of ill repute with a monkey on her back and Porgy, a severely crippled man who is in love with her. Alicia Hall Moran plays this iconic character and does a valiant acting job, but a rather uneven vocal performance.

She does convey the struggle to stay clean and sober, and her unhealthy magnetic attraction to the abusive Crown, played by an imposing Alvin Crawford.

We see her trying to resist the lure of drugs and money dangled before her by the evil Sporting Life, wonderfully played by Kingsley Leggs. She desperately sees Porgy as her only salvation.

Nathaniel Stampley gives a stunning characterization of the crippled Porgy, with his gorgeous, powerful voice bringing the house down more than once.

The narrative is a beautiful, but sometimes tragic love story illuminating the demons that live inside of all of us, as well as shining a light on the day-to-day struggles of poverty, loss, and living under the potential “whip” – metaphorically speaking – of the white man in the form of a menacing detective played by Dan Barnhill, and Fred Rose’s equally menacing policeman.

Crown that costs the incredible sum of $2.00, or “Street Cries,” an amusing musical number wherein The Strawberry Woman (Sarita Rachelle Lilly,) Peter, The Honey Man, (Chauncey Packer,) and The Crab Man (Dwelvan David) belt out their songs praising their wares.

There are tragic scenes like the frightening hurricane sequence, when the seedy Crown returns to claim his Bess, the heart-breaking scene when Bess bows to her demons, and Serena’s wrenching show stopper “My Man’s Gone Now,” sung by a most talented Denisha Ballew, whose voice soared off the stage.

There are so many chestnuts in this production, all of which were performed to perfection and included, “A Woman Is A Sometime Thing,” sung by Jake and the Ensemble, Porgy’s “I Got Plenty of Nothing,” the tug at your heart strings “Bess, You Is My Woman Now,” sung by Porgy to Bess, and Serena’s heart-wrenching show stopper, “My Man’s Gone Now,” sung by a most talented Denisha Ballew, whose voice soared off the stage.

Dressed in ESosa’s pastel costumes, the ensemble dance numbers, choreographed by Ronald K. Brown, took on a decidedly African-tribal tone, which seemed quite appropriate for this updated version and were superbly executed by the commanding cast, all of whom are stars.

This production of “Gershwins’ Porgy and Bess” crept into the hearts of much of the audience who became very involved in the story.

For example, when Crown returns to claim Bess, someone seated behind me muttered, “Damn” and when Bess succumbs to her addiction, there was a mass “Oh no.”

So, again, despite any trepidation one might have about this production’s authenticity, it is a rare chance to hear this fabulous music once again and to enjoy outstanding performances by a remarkable ensemble.