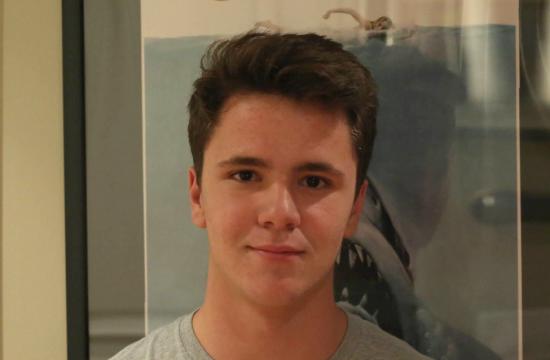 Nick Paskhover is about to graduate from Crossroads and head cross-country to New York University, where he will begin his creative studies at the Tisch School of Film and TV next semester. There, he hopes to hone in on his skills as a filmmaker.

His latest short film, “The Briefcase” – which features no dialog – was showcased at the Archer Film Festival in Century City on April 30. A story about a homeless man who finds an unattended briefcase and ultimately receives a pleasant surprise when he finally opens it, Paskhover’s silent film-era movie could speak volumes of where his filmmaking career could go.

The Mirror caught up with Paskhover and chatted about “The Briefcase” and his future.

It’s a common assignment for student filmmakers to create a short film without dialog and to tell a story via body language, props, etc. Was that the case with ‘The Briefcase’?

Nick Paskhover: Telling “The Briefcase” without dialogue wasn’t really an “assignment,” but it’s a challenge that I really wanted to take on. A while back, I checked out a copy of Roman Polanski’s “Knife in the Water” – the bonus disc had a small collection of his old short films. The menu screen featured a quotation from Polanski about his philosophy on short films, and it basically said that short films are most effective without dialogue. Moreover, 90 percent of the good short films I saw used little or no dialogue; the films that did came off as too melodramatic. So when I set out to write my next short, I really wanted to try and follow that philosophy.

“The Briefcase” appears to be homage to the silent film era. Your lead actor reminded me of Charlie Chaplin. Was this your intention?

A little bit. As I was writing the script, it made sense to tell this story in that style. I was also loosely inspired by Polanski’s short film, “Two Men and a Wardrobe.” Chaplin’s tramp character is a little similar to Doug the homeless man. There was a fear that the pantomiming and Chaplin-style acting could be a little over the top, but it felt good on set, so we just stuck to it. John Hundrieser also did a great job of improvising a little bit and adding his own touch to the action. The black and white was also something that just felt right for me from the very beginning.

Would you say there is a bigger picture to the story? After all, it’s an age-old question of “what would we do if we found a bag full of money,” or something to that effect.

Certainly. The protagonist is a guy who has nothing, but his biggest problem is that he’s lonely. Homeless people rarely get any real human attention. The businessman on the bench is too caught up in his phone conversation to give the homeless man any attention. All the things he dreams about can create temporary happiness (except of course the pile of paperwork), but they probably won’t make him truly happy. Some of the wealthiest people in the world complain about being miserable. Drugs can obviously lead someone down a dangerous path.

Humans are social animals; we aren’t biologically wired to spend our lives alone. We need companionship of some sort. The protagonist finds that companionship at the end of the film, and in my mind, it satisfies him more than any pizza, bag of cocaine, or pile of money ever could.

At the end of the film, I took away this message: sometimes, it’s the simple things in life that make us happy. Is this a fair message? Similarly, is this a message you intended or hoped to have the audience take away from “The Briefcase”?

Yes. Material things like money can certainly make our lives more comfortable, but in the end it’s relationships that really make us happy.

“The Briefcase” has some elements of film noir, silent film, mystery, and comedy. What kind of genre would you place this film?

I’d probably classify “The Briefcase” as a mystery or a modern version of a Chaplin silent film. It has some comedic elements, but I don’t typically write comedy and didn’t really try to force humor in any part of the film. I absolutely love film noir – anything with mystery or suspense really gets me excited. Hopefully, I can carve out a career in those genres.

Absolutely. It’s something I’ve been obsessed with ever since I was a kid. It’s a tough business to break into, but I’m hooked. It can get really frustrating and discouraging at times. But as soon as I finish a project, I find myself itching to make something else and continue to get better as a filmmaker.

You wore several hats in making an 8-minute short film, including director, producer, writer, and editor. What was the biggest challenge in making “The Briefcase”?

I’ve gotten used to doing a little bit of everything in the filmmaking process – that’s sort of how it goes on the student film level. Producing can often be the most stressful because it’s the part of the process that comes in most conflict with the creative side. There were certain moments in the script that I ended up scrapping simply because they weren’t practical with the resources I had.

Who is your inspiration in the film world?

“The Briefcase” screened at the Archer Film Festival. Do you plan on taking the film elsewhere?

Yeah. The film was actually submitted to quite a few other festivals – some of which I’m still waiting to hear back from. I’m looking forward to moving on and focusing on future projects but I’ll probably submit “The Briefcase” to a few more festivals as they start accepting submissions.