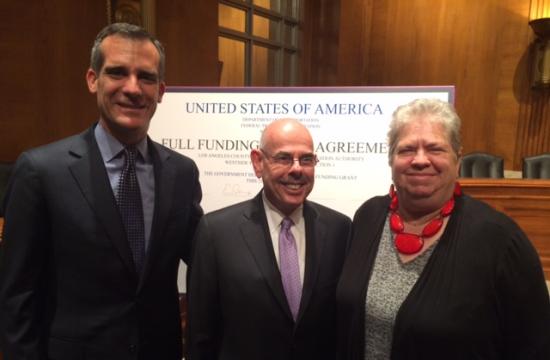 Additionally, the U.S. Dept. of Transportation simultaneously granted Metro a low-interest loan of $856 million from a Transportation Infrastructure Finance and Innovation Act (TIFIA) Loan to complete the funding package for the first phase of the project. Combined, the nearly $2 billion in project commitments represent the single biggest federal transportation investment in the history of Los Angeles County. The remaining $821 million in project funding includes Measure R, City of Los Angeles, and other existing local and federal funds.

According to the Los Angeles County Economic Development Corporation, construction of the first phase of the Purple Line Extension will support over 25,000 jobs during its construction.

With federal funding commitments now in place, Metro will soon recommend the selection of a design-build contractor. Preliminary construction activities for the first segment of the project could begin later this year, with completion of the first subway segment anticipated in 2023. The new segment will add three new subway stations: Wilshire/La Brea, Wilshire/Fairfax and Wilshire/La Cienega.

The Purple Line Extension is a critically important, regionally beneficial transit project to extend L.A.’s subway further west from its terminus at Wilshire/Western in the Mid-Wilshire District. The project was overwhelmingly approved by two-thirds of L.A. County voters in 2008 as part of the Measure R transportation sales tax initiative.

“Our lives in West Los Angeles revolve around traffic. Where and when we travel is largely determined by traffic congestion patterns,” said Zev Yaroslavsky, L.A. County Supervisor and Metro Board Member. “Extending the subway will offer commuters an alternative to driving through one of the most congested metropolitan street and highway systems in the nation. We can now see light at the end of the tunnel as the new subway will begin to serve the Wilshire corridor – one of the densest and most important commercial and residential sectors of our region.”

“I am pleased to learn that the Department of Transportation has announced a Full Funding Grant Agreement for the Purple Line extension,” said Congressman Henry Waxman. “This federal money will turn years of planning into a reality, linking Downtown to the Westside and LACMA, the La Brea Tar Pits, Restaurant Row, UCLA, and countless other sites. The Purple Line will be a critical transportation alternative, reducing traffic and congestion and when finished, will connect Westwood to Union Station in 25 minutes. This is an important step towards making this project a reality.”

Current funding streams require the project to be built in three separate phases. When all phases are complete, the Purple Line will extend westward for nearly nine miles with a total of seven new stations.

Future planned stations beyond the initial three include: Wilshire/Rodeo, Century City, Westwood/UCLA, and the Westwood/VA Hospital. Under this three-phase scenario, the total project is forecast to cost $6.3 billion. Measure R funds will pay for approximately three-fourths of the overall project cost. Metro is pursuing alternate funding scenarios that could accelerate subway construction.

“The ‘Subway to the Sea’ is about making Los Angeles work better, making it easier for Angelenos to get to work, and putting Angelenos to work,” said Rep. Karen Bass (D-Calif). “This subway project is another investment that is building up our great city to connect Angelenos to where they live, work and play. It is expected to create over 25,000 jobs – a needed boost to our local economy, and Angelenos today and for generations to come will benefit from this important project.”

The Purple Line Extension to the Westwood/VA Hospital station will generate about 49,300 daily weekday boardings at the seven new stations. Using a different measure, there will be about 78,000 new daily trips on the full Metro Rail System as a result of opening this line. During peak periods, trains are expected to run every four minutes. During off-peak periods, they are expected to run every 10 minutes.

“Today we are moving forward with the next generation of transit for our next generation and together are transforming Los Angeles County,” said O’Connor, Santa Monica mayor and Metro board member.

Over 300,000 people travel into the Westside every day for work from throughout the region. More than 100,000 trips leave the area for outside destinations. These numbers are expected to increase over time.

The Purple Line extension will offer improved connectivity to the entire Metro Bus and Rail network, as well as municipal bus lines and other regional transportation services.