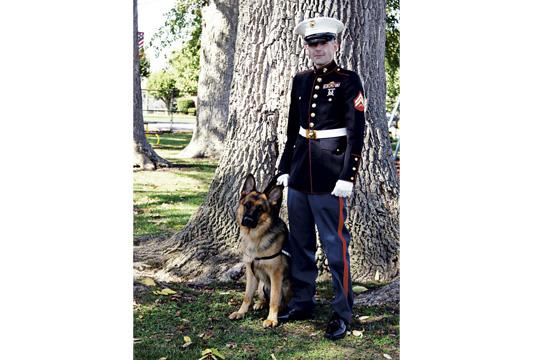 The month of June is supposed to be recognized as Post-Traumatic Stress Disorder (PTSD) Month. However, the general public is sadly unaware of the tragic statistics that pertain to the disorder and specifically to the veteran population.

Every day, 22 veterans commit suicide due to PTSD. Inevitably, the families and friends of such veterans are impacted by the state of their loved one. In 2012, there were more veterans who committed suicide than those who died in action. With 2.5 million veterans produced from the 9/11 generation, the need for veteran assistance is blatant, yet overlooked.

“If that’s not an epidemic, then I don’t know what is,” Joshua Rivers, founder and president of The Battle Buddy Foundation said.

The Battle Buddy Foundation (TBBF) is a non-profit organization that seeks to help resolve this grave issue by utilizing man’s best friend. The corporation assists veterans suffering with PTSD by pairing them with “battle buddies”: psychiatric service dogs.

When Rivers and his friend Kenny Bass returned from combat in 2003, they remained in touch and stayed good friends, but there was no doubt that both experienced difficulty adjusting to civilian life. Bass in particular endured a series of challenges that come alongside PTSD.

“Everyone that goes to combat changes. No one comes back the same,” Rivers said. “The guy that I knew was gone.”

About a year and a half ago, Bass reached out to Rivers after he got prescribed a $15,000 dog for his PTSD.

“Within the first five minutes of the conversation, I could tell just how much this dog was helping him manage his symptoms,” Rivers said.

The two decided to jumpstart TBBF soon after, and due to the unbelievable need in the veteran community for help, the organization’s progress has developed very rapidly. Along with social media, the help of “giive,” a Santa Monica-based foundation that seeks to inform the public about local quality non-profit organizations, has contributed to promoting awareness of TBBF.

Within a year and a half, 4,000 veterans or family members of the veterans have reached out to the foundation from all over the country.

“The veteran is the most important priority, so we don’t like leaving people on waiting lists,” Rivers said. “We try to refer the veteran out to another organization or program so that they can get some sort of help as soon as possible.”

Unfortunately, there have been cases in which veterans have committed suicide during the waiting list stage.

Lack of funding stands as the primary hindrance. The canines are all donated from a variety of sources, as TBBF maintains several relationships with breeders from all over the nation. However, the dogs must undergo training and receive certification as a psychiatric service dog, which explains the costliness of the dogs. But the tasks that the dogs are taught to perform are undeniably beneficial – and quite impressive as well.

The dogs can help the veteran manage their anger, as they can sense an uprise of emotion and can de-escalate the negative mood. Amputated veterans can receive help with everyday tasks like picking up a set of keys, doing laundry, and retrieving a glass of water. The veteran can also be woken up during a nightmare, as the service dogs can also sense when their owner is experiencing a bad dream and can gently jump up on the bed.

Best of all, each canine is custom-trained to fit their individual veteran’s set of needs.

“Obviously, each veteran is different,” Rivers said. “Some are dealing with PTSD, some with traumatic brain injury, and others with missing limbs.”

The Foundation is committed to having “elite dogs in an elite program,” so the funding and resources necessary to properly train and certify the service dogs remain a challenge.

However, this is where the surrounding community comes in, as there are a few ways to contribute to this worthy cause. TBBF has made available volunteer applications, staff opportunities, and both one-time and recurring donation options. Veterans and service dogs can be sponsored as well. TBBF is also looking for corporate sponsors.

“There is no shortage of veterans and no shortage of dogs,” Rivers said. “No one is beating the drum loud enough to tell American society that there is something wrong with their veterans.”