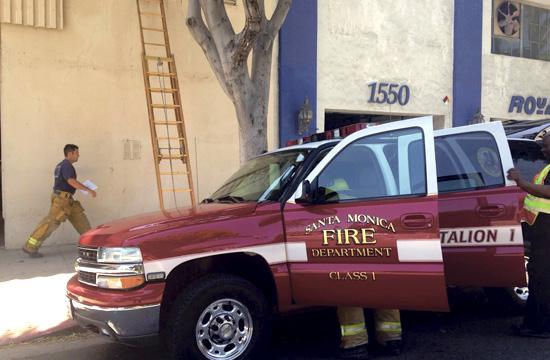 A team of 22 firefighters could be found around the premises of a burning building at 1 pm on the corner of 5th and Colorado on Monday.

It was certainly an unusual sight: a group of men and women, dressed in boxy yellow uniforms, chatting casually next to a wall as it erupted with smoke.

The team remained completely calm, even as black clouds fought their way through windows and escaped through electrical outlets. Directly outside the abandoned building was a lone sign that read: Drill In Progress.

SMFD Captain Judah Mitchell, who serves as a training captain and public information officer, described the purpose of the day’s events as mean to “show exactly what will be happening” during a live fire.

The abandoned building, or “acquired structure,” is about to be torn down so that a new hotel can be built at the property. But before this can happen, the team was able to come in and run some practice drills.

Tests like this help to prepare the firefighters and teach them how to react and what they need to do.

The tests were broken up into three parts: fire behavior, ventilation, and rehabilitation.

The last part, rehabilitation, is meant to ensure that the firefighters stay safe and have the necessary time to recover from the exhausting feat of putting out a fire.

The drills concluded on Tuesday.

A Courtyard by Marriott hotel will be built on the site once the existing structure is torn down.