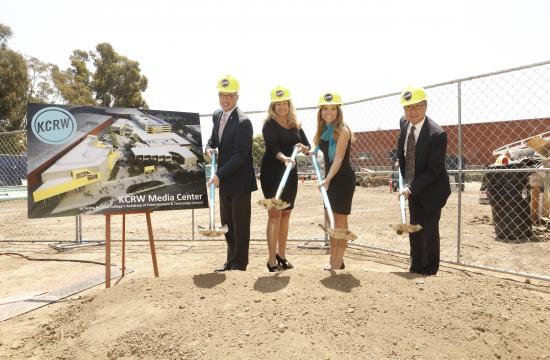 The groundbreaking also marked a milestone in the first major capital campaign of KCRW’s 75-year history to raise $48 million for the Media Center design and construction, new programming, and technology investments.

Jennifer Ferro, KCRW President and General Manager, said this was an incredibly important moment in KCRW’s history – adding KCRW couldn’t be more thankful to its licensee and partner Santa Monica College, Santa Monica voters, and the generous supporters for their vital contributions in bringing the KCRW Media Center to life.

“For the first time in our 75-year history we will be able to bring the community into our home and share the incredible performances and discussions that take place on a daily basis,” Ferro said.”

“We share a unique synergy with KCRW, and look forward to creating a dynamic learning environment for our students who are passionate about journalism, media, and radio,” Tsang said.

To-date, KCRW has secured $33 million of the total $48 million capital campaign goal, including a $28 million contribution from Santa Monica College, licensee of KCRW, with funding from 2008 Bond Measure AA.

“KCRW’s innovative programs and live events inspire the imagination and bring communities together,” said Wallis Annenberg, Chairman of the Board, President and CEO of The Annenberg Foundation, KCRW’s largest private donor. “They provide an invaluable public service to Southern Californians and listeners worldwide. We are thrilled to be a part of this illustrious endeavor.”

Over the past 30 years, KCRW’s staff has grown from 14 to 110 in extremely cramped offices and studios beneath Santa Monica College campus.

With a history of bringing unique live experiences to Southern California and around the country, KCRW will for the first time in its history be able to host the community at its own 1,400 square-foot Performance Studio and Viewing Gallery.

KCRW will also have the opportunity to program events at the 18,000-square-foot Wallis Annenberg Plaza Courtyard and Outdoor Stage and a 180-seat auditorium.

SMC’s Academy of Entertainment & Technology Campus is located in the middle of Santa Monica’s creative business district, and the forthcoming Expo Line.

The campus will include a newly-remodeled 50,000 square-foot teaching facility, a new 30,000 square-foot addition with TV and production studios, a cafe, and a new 430-space parking garage.

Construction is projected for completion by 2015, with both the KCRW Media Center and SMC Academy of Entertainment & Technology Campus operating from the new buildings by early 2016.