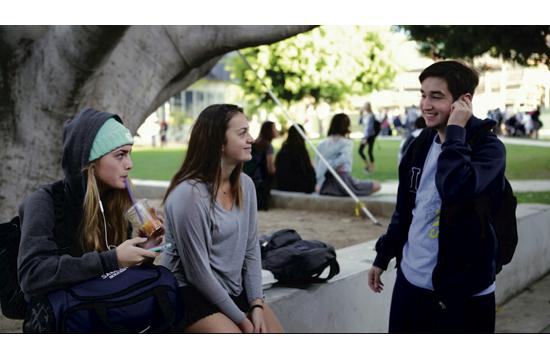 When it comes to inspirational football films, “Rudy” is often the gold standard. Here in Santa Monica, the City’s namesake high school has a “Rudy” of its own, and his name is Matthew Tapia. The 18-year-old-senior is the subject of short documentary.

Fittingly entitled “Matt,” the short film released May 27 on YouTube tells Tapia’s story of beating the odds. Specifically, Tapia was born three months premature and, at the time, given a 5 percent chance to survive.

His weight at the time of birth: 1.5 pounds.

Now at age 18, Tapia is a senior at Samohi. On the film’s website, Tapia is described as “gregarious” and “defiant,” a young man who relied upon “stubbornness” to not only survive but put himself on track to attend college next year.

Indeed, Tapia is not going too far away from Santa Monica, as the graduating senior will be enrolling at UCLA in the Fall 2014 quarter.

“Matt is a huge sports fan and dreams of being a play-by-play [announcer] one day,” the film’s website described about Tapia. “Heading into his senior year, Matt took advantage of an opportunity offered to him by a brave coach and some open minded kids, and joined the football team.”

While on the Samohi football team, Tapia attended every practice.

With Tapia on the team, the Vikings football squad recorded a winning record, made the playoffs, and advanced into the second round.

Along the way, Tapia played in two games. However, his impact on the team was far greater, as he was also described as the “indomitable spirit and positive attitude” that inspired Samohi’s football team discover its identity.

He also played in one playoff basketball game and one baseball game.

Director Seth Shapiro, who is Tapia’s neighbor and a friend of his father, was inspired to document the teen on film after he made the Samohi football team.

“I wanted to know more about the coach giving this special opportunity to Matt, especially in a contact sport like football. I also wanted to know how the team would treat Matt and what they might learn from each other,” Shapiro, a filmmaker and producer who focuses on sports-themed films, said. “I was so impressed with how tolerant and loving Matt’s teammates were.”

Produced by Diesel Films, “Matt” is currently available to view online at www.youtube.com/watch?v=rMogvjXWXWc.

For more information about the film and how to view it, visit its website at www.mattthefilm.com or visit its Facebook page at www.facebook.com/MattTheFilm.

In addition to watching the film, Tapia encourages viewers to support the National Bullying Prevention Center.

On the film’s website, an official “Matt the Film” t-shirt is available for purchase. All funds raised from t-shirt sales will directly fund the Samohi football team, which, due to budget cuts, is apparently in need of shoulder pads and helmets.

“What I really hope people take away from ‘Matt’ is the idea, ‘Don’t let other people’s expectations be yours,’ Shapiro said. “I’m proud of the fact that the film has so much depth to it; it’s not just a single emotion. There are many themes – friendship, brotherhood, teamwork, family – and, I think, universal appeal.”