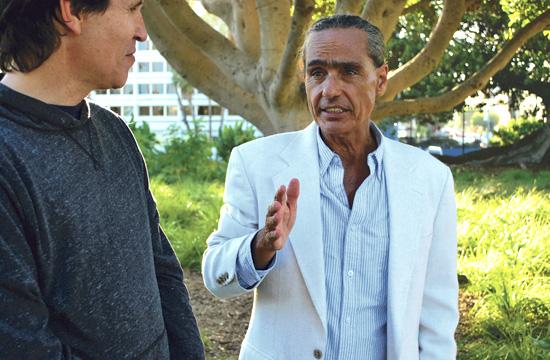 A walk in the park, a vegan meal in the shade, and an after party at Santa Monica landmark Chez Jay: these activities were part of Michael Feinstein’s announcement that he is seeking a return to the City Council, where he once served as mayor more than 10 years ago.

Feinstein formally announced his bid for this year’s City Council race on Tuesday in front of a few dozen supporters at Tongva Park. Should he be elected to one of the three seats up for election during this cycle, he would return to the dais almost exactly after the day he left the City Council in December 2004.

His announcement at Tongva Park was a symbolic gesture, as Feinstein took credit for helping lay the foundation to bring the public park across the street from City Hall. The land was originally the proposed site of a commercial development. However, City Hall bought the land from RAND during his first term in office. The council ultimately decided to build a park on the land.

During a nearly 50-minute speech, Feinstein outlined his campaign. He said he hopes to spur conversation within the community and find a way to keep residents from opposing every single proposed development, instead finding middle ground to have projects built to benefit Santa Monica.

Beyond development, Feinstein said his campaign would also focus on affordable housing, homelessness, and the future of Santa Monica Airport.

The former mayor also said he would try to lay the foundation for another major park project, this one a 17-block park built directly above the Santa Monica Freeway as a cover.

Through all the specific plans and policy goals mentioned, Feinstein said his candidacy is ultimately about promoting civil dialog amongst Santa Monica residents, policy makers, and business leaders.

“I feel that this community is being ripped apart by our debate on development and people aren’t talking to each other. People aren’t listening to each other,” Feinstein said. “One of the things I want to accomplish in office in the next four years is to provide an ability to help this community to actually talk together, learn together, and respect our differences, and at the same time find ways to get projects that we want to see happen, rather than just oppose the ones we don’t want to see happen.”

First elected to the Council in 1996, Feinstein earned the highest number of votes in 2000. He was appointed to mayor that same year. In 2004, Feinstein’s second re-election bid was unsuccessful.

Holbrook is the longest-serving council member in Santa Monica history, while no member of the City Council has served as long as Kevin McKeown without sitting in the Mayor’s chair.