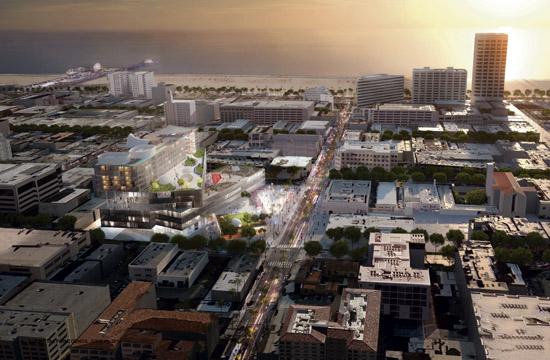 Santa Monica City staff will be looking for direction from Santa Monica council members this Tuesday for the preliminary designs of a proposed project on City-owned property between Fourth and Fifth Streets and just south of Arizona Avenue.

At the heart of the council discussion and direction on June 10 will be height restrictions. Specifically, the original designs of the proposed project between Fourth and Fifth near Arizona called for a 148-foot building.

However, in light of a recent council policy, City staff is now putting forth plans to fit within an 84-foot maximum height requirement.

According to City staff, the priorities of the development project planned for downtown Santa Monica include open space, circulation, shared parking, culture and public art, and affordable housing.

Under an alternate proposal, the potential development between Fourth and Fifth streets would feature four “bars” that would appear to be stacked on top of one another, with each stacked bar representing a different use. Combined, the four bars would be seven stories and 84 feet high.

The ground-level bar, for example, would be for retail and culture use and be one floor and 16.5 feet high. The culture use would use 12,000 square foot of space; retail would be allocated 40,000 square feet.

Workspace would be the next level up, taking up floors two through four and rising 12 feet high. A lion share of the square footage – 162,350 – would be dedicated to the workspace bar.

The upper floors would feature one full bar dedicated entirely to a hotel plus a second bar combining workspace and residential.

A planned hotel bar would take up floors five through seven, with each floor being 10.5 feet in height. Proposed to feature 135 rooms, the proposed hotel is anticipated to be 72,000 square feet in size.

Adjacent to the hotel bar would be the workspace/residential bar. In this bar, floors five and six would be dedicated to workspace while 24 residences would be featured on five through seven.

In all, the 84-foot building would feature 337,000 square feet of mixed-use development.

More details of the proposed project and its possible design elements will be discussed at greater length and analysis following the June 10 council meeting.

Other items on the June 10 agenda include a resolution calling for the County Registrar to consolidate Santa Monica’s local election with the Los Angeles County Statewide General Election ballot on Nov. 4. Also on the agenda is the second reading of an ordinance establishing speed limits for certain Santa Monica roads.