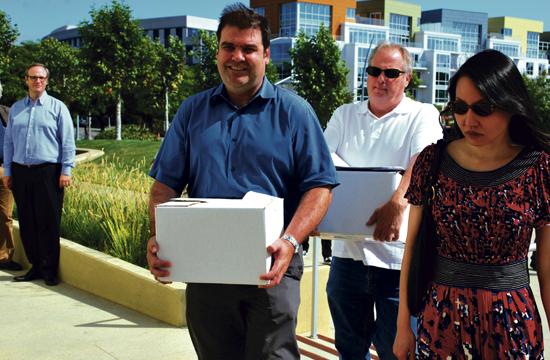 A group of proponents aiming to amend the Santa Monica City Charter to require voters approve any potential plans to redevelop the local airport submitted more than 15,500 signatures to City Hall on Tuesday.

If County officials verify the submitted signatures, the issue of who determines the future of Santa Monica Airport (SMO) could be on the ballot. The initiative’s proponents hope voters would be able to decide on the proposed Charter amendment in the Nov. 4 general election.

The proponents, who organized under the group “Santa Monicans for Open and Honest Development Decisions,” only needed to submit about 9,000 signatures.

A committee receiving funding from the Aircraft Owners and Pilots Association (AOPA) and supported by businesses, pilots, and residents in the area, the Santa Monicans for Open and Honest Development Decisions said it believes City officials “have not been forthcoming with voters and taxpayers about redevelopment and land-use plans for the valuable airport property.”

“The aim of the ballot initiative is to put the future of the development of airport land in the hands of the Santa Monica residents,” said John Jerabak, one of the members of the Santa Monicans for Open and Honest Development Decisions. “It’s 227 acres of flat land that the residents own. Any development decisions about that land need to be vetted by the entire community.”

Joining Jerabak in submitting the 15,500-plus signatures to Santa Monica City Clerk Sarah Gorman were Flora Yin and Michael Arno.

According to the initiative’s proponents, the Charter Amendment would achieve two requirements: voters would determine whether the use of SMO would be changed to non-aviation purposes; if voters do not approve any changes for SMO, the City must continue operating it as an airport.

“This Charter Amendment is an insurance policy for the citizens of this city,” Lauren McCollum, one of the initiative’s proponents and a local businesswoman, stated. “If the legal status of the land changes, the City can make whatever land use decisions it wants. But, it must get voter approval rather than listening to a few political insiders.”

Interestingly enough, the Santa Monica City Council unanimously adopted a plan to look into how SMO could either be shut down or have its operations significantly cut. Furthermore, Santa Monica Mayor Pam O’Connor and Santa Monica Councilman Kevin McKeown both said at the March 25 council meeting if SMO were indeed shut down, it would remain a low-density project and the land where the airport sits would not be converted into “Century City West.”

However, while Santa Monica may indeed develop a low-density development policy for the actual SMO land, the airport’s eastern edge is actually in the City of Los Angeles. By eliminating the land’s aviation use, proponents believe Los Angeles could develop high rises right up to the City’s border with Santa Monica at the airport.

In a statement released by the community group Airport2Park.org, the charter amendment proponents were accused of conducting a pay-for-signatures campaign.

“Many residents who did sign have asked the City Clerk to rescind their signatures,” the statement read. “The community campaign was effective enough to push the price-per-signature the AOPA paid from about $4 originally to as much as $20 this week.”

The statement continued: “The AOPA has spent freely to try to buy a spot for its measure on the November ballot. It’s prepared to spend much more in its effort to block the city’s desire to increase airport rents to market level and to mitigate SMO’s current negative health and safety impacts, and prevent Santa Monica from ultimately closing the airport and building a great park.”