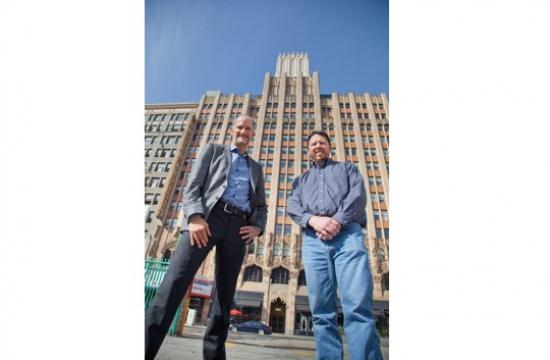 Serving as executive architect for the 13-story,182-room Ace Hotel, KFA was mainly responsible for assuring that the registered landmark met all of the requirements set forth by the City’s Office of Historic Resources,” said Wade Killefer, KFA design/principal.

“Many building features, including the 1,600-seat theater, tower and terrra cotta facade were retained,” added Killefer, whose firm worked on the building in partnership with GREC Partners, Chicago, and Los Angeles-based Morley Builders.

Born as the United Artists office building in 1927, the exquisite Spanish Gothic building was originally developed by a trio of the film industry’s most revered luminaries––Douglas Fairbanks, Mary Pickford and Charlie Chaplin.

For several decades the building served as a televangelist church, which added the famed “Jesus Saves” neon signs to the theater roof. One of the signs has been retained and relighted by the hotel. Its backdrop is the filigreed lantern of the hotel tower, long a feature on the historic downtown skyline.

The new project features a restaurant, bar and coffee counter at the ground floor entry on Broadway. In addition, there are multiple meeting and event spaces and an open-air bar, lounge and swimming pool at the rooftop level. Another focal point is the theater, with its expansive lobby and vast ornate auditorium, which will host live performances.

Highlighting the seventh floor is the presidential suite with a large terrace underneath the iconic religious sign, which will certainly become the backdrop of many photo ops for Ace guests.

A typical Ace room is efficient and well appointed with interiors by LA’s Commune Design. Each room offers custom Revo radios with globally curated music streams. Select rooms will feature a record player and a stash of vinyl for guest enjoyment, an Ace signature.

“Significantly, Ace’s structure also will pioneer the southern end of the Historic Core, which is just starting to see the intense type of development that the area’s northern portion has enjoyed over the past ten years,” noted John Arnold, KFA project manager, whose firm has played a major role in the conversion of many of the landmark buildings in the Old Bank District and throughout downtown LA.

The planned Broadway Street Car, which will eventually stop in front of the hotel, aligns perfectly with Ace’s enthusiasm for the bustling Downtown LA vibe, said Arnold.