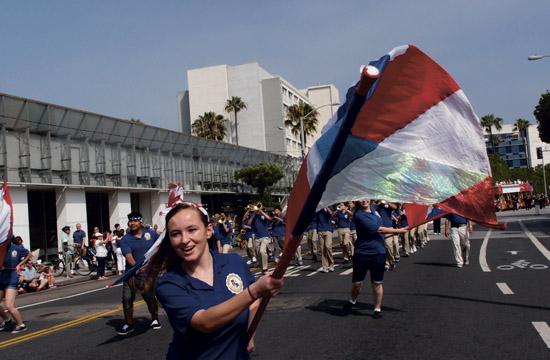 “May the 4th be with You” is the official theme for this year’s July 4 Parade in Santa Monica, organized by the Ocean Park Association, or OPA.

OPA Board Member/Parade Chair Jeff Jarow encouraged the Santa Monica community to focus on dressing in the classic Independence Day colors of red, white, and blue.

Jarow said it was important for people to participate both in the parade itself as well as in volunteering.

“In a year such as this, where there has been so much controversy, this event is a ray of sunshine for the community,” Jarow said. “The OPA is proud that this event is a non-political one.”

Jarow said the parade, now in its eighth year, was a “positive event for the City of Santa Monica.”

The parade theme is also reflected in this year’s Grand Marshal as OPA honors former Santa Monica Mayor Nathaniel Trives who has worked tirelessly for the Santa Monica community – and with as many titles that he’s held over the years, “Mr. Santa Monica” truly proves that imagination and vision have no bounds.

The 1.5-mile route will take revelers from the Pico Boulevard and Main Street, south on Main, turning west on Marine Street and onto Barnard Way, concluding south of Ocean Park Boulevard.

Parade participants will travel down this route either by walking, riding bikes, or scooters. Of course, the most popular form of transportation will be riding a classic car or float. Live or recorded music and animals are allowed, pending permission from OPA.

Additionally, in order to be consistent with the ideals of the City of Santa Monica, OPA is aiming to promote environmentalism.

It is a goal for everyone in the parade to be aware of being environmentally friendly. Organizers encourage parade participants to drive low emission cars, either hybrid or electric.

While it is impossible to predict what will happen during the actual July 4 Parade, Jarow said “it is going to be a fun one.”

"Black Lives Matter" – The rallying cry that went from a hashtag to a global movement, and a designer that...