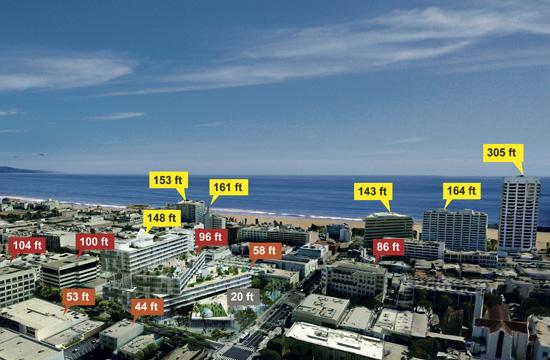 If all goes as planned, there could soon be a new 148-foot building in downtown Santa Monica. Then again, considering the current political climate, a referendum might sprout up before a shovel is ever placed into the dirt.

One anti-development referendum backed by a grass-roots residence group already prevented the Hines mixed-use project from moving forward, and another possible ballot initiative claims to residents a say in determining the future of the Santa Monica Airport.

Another petition is already actively in the works, coinciding with the City Council’s decision on June 10 to support a project proposing to build a 148-foot tall building on public-owned land between Fourth and Fifth streets (and south of Arizona Avenue).

Council members unanimously opted to figure out how to make the 148-foot proposal work ahead of an alternate 84-foot high proposal.

The 84-foot high building threshold has been a divisive subject for the City Council in recent times.

At this about this time last year, at the June 11, 2013, council meeting, three council members sponsored a discussion item requesting their colleagues to direct staff to slow down the public process for proposed developments who seek to build projects higher than 84 feet, or six stories. The direction was shot down, as the trio who sponsored the discussion item could not muster support from another colleague.

Two months later, the City Council supported a plan to restrict studies for the Downtown Specific Plan’s Environmental Impact Report (EIR) to proposed developments of up to 84 feet.

In the same vote in August 2013, the council also indicated developers seeking to build a project to Santa Monica exceeding 84 feet in height would have to pay for their own EIR and possibly seek an amendment to the Downtown Specific Plan. By shifting the cost of the EIR away from the city and toward the developer, a disincentive might be established to make future developers potentially think twice about building a high-rise project in Santa Monica.

Of course, that vote did not establish a height restriction at 84-feet for new buildings to be built in the City.

Still, there is at least one segment of the population that believes even 84-feet is too high. Many of those voices were at City Hall on June 10, making a case not to have Metropolitan Pacific development built at all.

During the June 10 council meeting, Metropolitan Pacific’s representatives requested the council support the 148-foot project ahead of the 84-foot counterpart, as the larger development would allow the developer to include more amenities such as affordable housing, signature architecture, and a wider tax base resulting in more revenues into City Hall’s coffers.

Interestingly enough, the tax revenues discussion comes at an interesting time as the City Council prepares to review the Santa Monica budget for the upcoming Fiscal Year, which, coincidentally, forecasts a deficit through next summer.

Whether or not the 148-foot project actually becomes a reality still remains to be seen, as there is a significant public process the development has yet to go through, including being vetted by the Planning Commission, discussed by the Architectural Review Board, a re-evaluated by the City Council.

It is even more important to note that the council’s vote on June 10 was not an approval of the 148-foot project but instead just a request to focus solely on the proposed elements suggested by that development.

The basic statistics of the 148-foot proposal: 12 stories high, 420,000 square feet in total building space, and mixed use elements such as a 225-room hotel, 200,000 square feet of commercial work space, retail, and 48 affordable housing units.

Some of the project’s benefits recognized by council members and City staff included the creation of new jobs in Santa Monica, green space elements, and the inclusion of 48 affordable housing units (compared to just 24 in the 84-foot proposal).

Council member Kevin McKeown stated while the 148-foot proposal had flaws, the shortcomings were potentially outweighed by the proposed community benefits.

A couple council members asked whether the amount of office space could be lessened in favor of additional apartments or hotel units. In general, residential use generates lesser traffic than office use.

Despite questions of how the 148-foot proposal could be made better and indications that the council’s action was far from a final decision on anything, there was a vocal group at City Hall during the meeting expressing their vocal discontent with the project.

Being on City-owned property, one perspective shared with the council was that the land would be put to much better use if it were turned into a park.

Armen Melkonians, founder of Residocracy.org, the grass roots campaign that road-blocked the Hines development agreement in March, expressed that perspective to the council.

There is precedent for converting City-owned land into a pricey public park: the $46-million Tongva Park across the street from City Hall.

Whether a park actually arrives at the City-own land between Fourth and Fifth streets near Arizona remains to be seen, but an online petition opposing any development on the property has already been circulation on Residocracy.org.

The online petition echoes some of the opposition to the development expressed at the June 10 council meeting, including traffic congestion and a tall building blocking out access to the sun.

For the time being, City Hall and the developer will be working together to hammer out details for the next presented proposal.