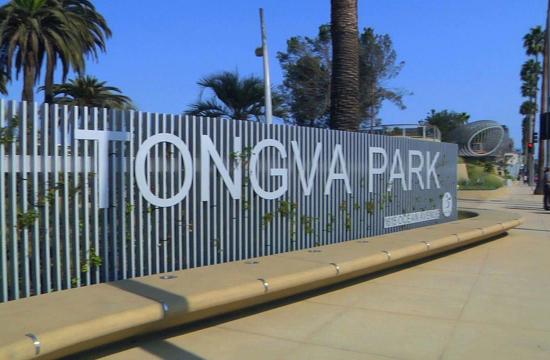 The City of Santa Monica was celebrated at the 44th Annual Los Angeles Architectural Awards on Wednesday at a gala luncheon hosted by the Los Angeles Business Council.

The event drew hundreds of the region’s leading architects, designers, and building professionals.

More than 35 world-class projects from across the architectural spectrum were recognized at the Beverly Hilton for design excellence and community impact.

The City of Santa Monica was recognized for the recently-completed Tongva Park and Ken Genser Square.

Santa Monica Mayor Pam O’Connor said the opportunity to reclaim space and restore a natural environment for public use didn’t come along every day.

“We’re thrilled with the results and appreciate the recognition from the Los Angeles Business Council,” O’Connor said. “Tongva Park and Ken Genser Square truly are places for people.”

The parks feature a dramatic topography and series of braided paths to create a unique public space that has been quickly embraced by residents and visitors of all ages.

Moderated by Sam Lubell of the Architect’s Newspaper, approximately 500 top professionals were in attendance for the annual event— the first design awards of the season.

The awards are presented to entire project teams – including the building owner, designer, contractor and developer – for their contributions to exceptional design in L.A. County.

A distinguished jury of owners, contractors, architects and civic leaders selected this year’s winners from hundreds of submissions.

The Grand Prize went to the new Emerson College Los Angeles facility in Hollywood. U.S Representative Xavier Becerra presented the Community Impact Award to the L.A. River, honoring the organizations that have supported the revitalization of the river.

Other winners included the Ace Hotel in Downtown L.A., the Forum in Inglewood, and Tongva Park in Santa Monica, among others.