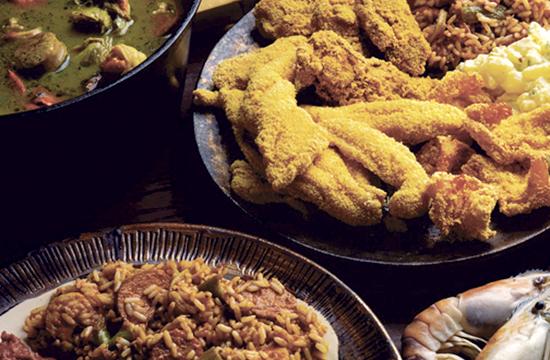 Known for its home-style Cajun and Creole classics, Uncle Darrow’s has been around for 20 years.

It was 1994 when Los Angeles customers were “officially” introduced to the southern flavors of Uncle Darrow’s.

A few years earlier, co-owner Norwood J. Clark Jr. asked a friend who owned a restaurant on Melrose Avenue if he could sell red beans and rice out of his establishment. The “Uncle Darrow’s” Louisiana infused grub soon outsold the main cuisine of his friend’s restaurant, which inspired Clark to embark on his own culinary adventure.

It was the right choice.

The first restaurant was located on Venice Boulevard, and customers started lining up down the street. It attracted high profile celebrities such as Halle Berry, Nancy Wilson, Ed Harris, Quincy Jones, and more.

In 2001, it moved to its current location on Lincoln Boulevard, just north of Washington Boulevard.

Here it has been a mainstay and an active part of the community.

“Being a first generation family business, we are not selling a product but a culture,” explains Clark Jr. “Take a look at New Orleans. It’s a potpourri of different cultures – that’s what I’ve been trying to attain.”

Clark along with his three cousins (Ronald Washington, Ronald Smith and Samuel L. Small, Jr.) are the co-owners of Uncle Darrow’s.

His family has a long history in the restaurant business and cooked for the world renowned Commander’s Palace in the famed garden district of New Orleans for more than 27 years. Clark himself also worked for the Hilton family in New Orleans, back in his college days.

When Uncle Darrow’s first opened, the owners wanted to create a healthier menu, choosing not to use beef, pork, or lard.

Instead, the spicy sausage used for the famous jambalaya is made from chicken and turkey. The seafood is farm fresh and the bread is baked daily. Cajun inspired breakfast is available on the weekends from 8 am to 2 pm.

Venice resident Nancy Wilding has been a customer of Uncle Darrow’s for years.

“I’ve been going to Uncle Darrow’s pretty much since it first opened,” recalls Wilding. “I love their gumbo (only served on the weekends) and their catfish po-boy.”

Twice a year Uncle Darrow’s throws a huge outdoor party in its parking lot for the community to celebrate Mardi Gras and Father’s Day. It features live bands and of course Uncle Darrow’s Cajun and Creole cuisine.

This year’s annual “Uncle Darrow’s Father’s Day Crawfish Boil” will be held this Saturday, June 14 (the day before Father’s Day) from 2-5 pm.

Treat your taste buds to an afternoon of Louisiana spice. Live music will be provided by the Country Legends with a splash of blues.