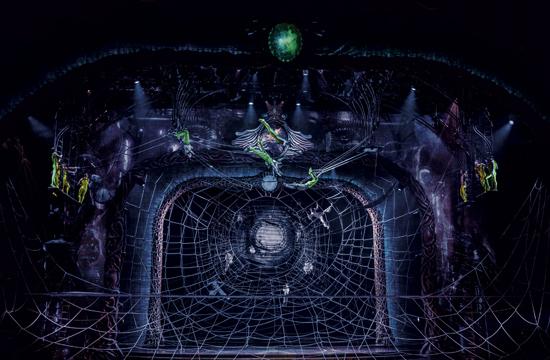 Set in a world where physical ability meets the extraordinary of Cirque du Soleil, the show Zarkana has embraced its new home of ARIA Resort & Casino in Las Vegas.

The name Zarkana is a fusion of the words “bizarre” and “arcane” (arcane means “mystery” or “secret”).

The twisted fictional world of Zarkana is an elusive destination that is fantastic yet bizarre. The name refers to the irresistibly odd and delightfully strange aura of this place and its inhabitants.

Zark, the ringmaster of an extraordinary circus coming back to life, guides us in an abandoned theatre populated by a motley collection of off-the-wall characters and incomparable acrobats.

Zarkana is a visual vortex set in a twisted acrobatic fantasy universe where, little by little, chaos and craziness give way to a true celebration.

The show opens with clowns Hocus and Pocus who emerge after a hiatus of many years in an abandoned theater to awaken the Movers, white-clad spirits of the theater.

Hocus and Pocus lead the reunion together with the Movers, bringing to life an extraordinary circus. Hocus and Pocus bungle their way through an eye-popping acrobatic extravaganza of high-energy acts reminiscent of the golden age of circus and side shows.

Here is a look at a few of the most entertaining acts:

A ladder duo exhibits a mastery of balance while climbing higher and higher to reach Sleepy Clown, who is trapped in the theater rafters more than 30’ above the stage.

Emerging from the depths of the theater, identical twin brothers attach themselves to straps and fly high into the air and over the seats of the theater, immersing the audience in the beauty of their movements. Accompanied by the captivating melody of Mandragora, their graceful maneuvers leave one and all breathless with their aerial prowess and ethereal fluidity.

In a joyous reunion reminiscent of a day at the park, the Movers enchant with childlike enthusiasm as they take part in a celebration of the Russian Bar artists – one who is launched high above the narrow and flexible bar doing twists and multiple somersaults before landing expertly back on the bar with the aid of her powerful porters.

Under the spell of Kundalini, the snake lady, and accompanied by a chorus of lithe fire breathers, the high wire artists exude amazing balance, control and precision as they speed across their wire performing jaw-dropping stunts – all while avoiding the ball of fire that taunts them.

Chasing Pocus into a strange world seemingly on a planet far from home, the extraterrestrial Jovians perform outlandish stunts on giant wheels, while others fly through the air twisting through suspended aerial hoops creating a dizzying tableau which reflects the kookiness of this foreign land.

The Oracle, an accomplished visual artist, interprets and summarizes the events that have been uncovered and those still to come as she creates temporary masterpieces made of sand.

Caught in the web and under the spell of Tarantula, the spider lady, flying acrobats crisscross high above the stage with meticulous timing as they are launched off platforms and bars, creating an effect of visual symmetry and tight choreography.

Testing the quantum machine, an experiment led by the Mad Scientist, leads to the unveiling of an outlandish dual caged apparatus with two artists who leap into place resulting in an act of high speed and daring movements, powered by pure physical strength.

Illustrating a moment of quiet poetry and refined grace, complemented by an enchanting and haunting score, a solo artist takes center stage effortlessly balancing his weight with the fluidity of ballet and the strength of an athlete.

Human pyramids engulf the stage in an act of amazing power and agility. As the group of acrobats defies gravity and space, they race across the stage with precise movements and playful choreography. Using only their bodies to suspend and propel each other, the acrobats astonish with their strength.

Zarkana performs Friday through Tuesday at 7 pm and 9:30 pm. There are no performances on Wednesdays or Thursdays.