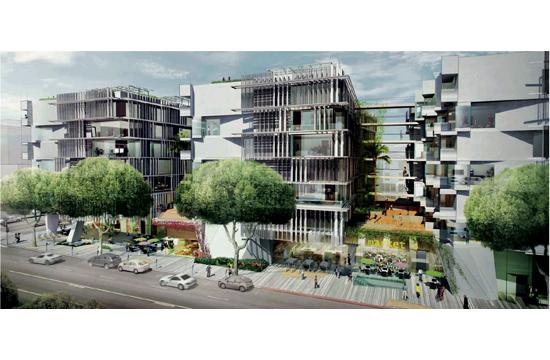 Slow growth does not mean no growth. Though a proposed multi-use project in front of the Santa Monica Planning Commission did not squarely fit with the specifications outlined by the City’s trusty land use document, commissioners – including those who have consistently advocated for slow growth – voted July 9 to allow a development agreement (DA) to build a seven-story, 84-foot building at the Fred Segal Building on Fifth and Broadway to move ahead in the process.

Located at 500 Broadway, the DA proposes 330,344 square feet of mixed-use development, including about 262 residential units and 577 parking spaces in four levels of subterranean parking.

The developers told commissioners the goal of the 500 Broadway project was to fill the need for more housing in downtown Santa Monica.

“There’s a real serious imbalance downtown between jobs and housing,” Tom Paradise, the project manager for 500 Broadway, told the commission. “Some 27,000 people work downtown. Only 3,000 people live downtown. We think there is a need for more family housing.”

Paradise told the commission most of the housing downtown – about 80 percent, he said – are either studios or one-bedroom units.

He also said the project’s affordable housing element would exceed the City’s requirements.

Other elements of the multi-use development include ground-floor retail, proximity to an Expo Line station (Fourth and Colorado), open space, and widened sidewalks.

The ground-floor retail would possibly be a large grocery store, Paradise said.

To Paradise’s point of the housing imbalance and type, the proposed DA, according to City staff, proposes a residential unit mix of no more than 20 percent studio, at least 20 percent two-bedroom, and a minimum of 10 percent of three-bedroom units.

Still the discussion on the dais focused on meeting affordable housing requirements, design, parking, widened sidewalks, and the DA not fully being consistent with standards outlined in the Land Use and Circulation Element (LUCE).

For example, neither the height of the building (84 feet and seven stories) nor the residential floor-area ratio, or FAR, of 4.5, are not in compliance with the LUCE.

Also, at least one commissioner hoped the project would include more short-term bicycle parking.

Ultimately, the commissioners were overall pleased with the building’s design and recommended the proposed mixed-use project be allowed to continue to the City Council for a float-up hearing.

The Architectural Review Board (ARB) also supported the overall design of the proposed project.

Beyond the discussion at the July 9 Planning Commission meeting, the 500 Broadway project could be making a cultural arts contribution of about $600,000 and pay nearly $1.4 million for a transportation impact fee.

Other projects in the immediate area surrounding the 500 Broadway DA include the future arrivals of Courtyard Marriott and Hampton Inn and a six-story mixed-use project (DA pending).

The Planning Commission will see this project again at a formal hearing.