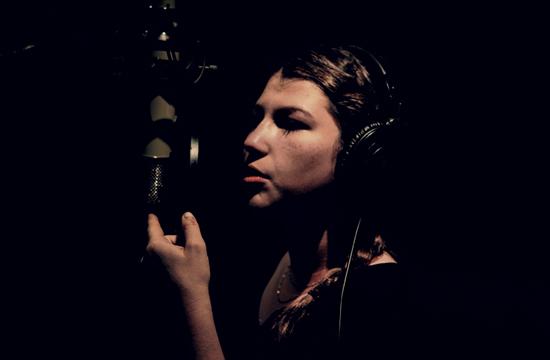 Veteran music producer Peter Asher is no stranger to creating emotionally charged music over the past four decades while producing hit records for James Taylor, Linda Ronstadt, and 10,000 Maniacs.

But the cover version of Simon and Garfunkel’s “Bridge Over Troubled Water” with a local 8th grade girl named Ava Delaney may be the one that moves you the most, even before you hear a single note.

That’s because of the motivation behind the recording. Asher was approached by Ava Delaney and her father Carl Daikeler to record the song so they could donate all the profits from downloads of the song.

“When Carl and Ava explained the idea and the purpose of this altruistic project I climbed on board without hesitation.  I confess that I was not aware of the enormity of the slavery problem until they showed me,” said Asher. “‘Bridge Over Troubled Water’ is a masterpiece of a song, and its composer is a friend of mine, so my only concern was that I do justice to both the cause and the song. And, of course I wondered whether this 14-year-old could really deliver.”

Ava Delaney said she was originally going to sing the song in choir at Malibu Middle School.

“But when my Dad heard me sing it, he thought we could do more with it,” Ava said. “We called it our ‘Bridge To Freedom’ project. Getting to work with this incredible producer, Peter Asher, and at the same time helping rescue these kids who are slaves by helping International Justice Mission raise money turned into a really special once-in-a-lifetime project.”

The artists worked out of The Village Studios in Santa Monica. The recording session started only after watching IJM’s DVD documentary called “End of Slavery,” which put the team in the mindset of the problem they were setting out to solve: There are more slaves now than all 400 years of the transatlantic slave trade.

It is estimated that there are close to 30 million people being held captive and abused as slaves. Children are an estimated 26 percent of those sold into slavery. And nearly two million of those children are exploited as sex slaves.

IJM has rescued more than 18,000 victims of slavery and oppression and secured the convictions of 800 traffickers, slave-owners, and other criminals for violent abuse of the poor.

Asher describes the process of making the record: “Our team created a contemporary arrangement of the song and you can only imagine my excitement when I first heard Ava sing it in the studio. She totally nailed it on the first couple of takes – singing the song with an intensity and emotional commitment beyond her years – as with an instinctive empathy for the children her own age who are being so grievously abused.  I am proud of this record, proud to have worked with Ava – and will be even more proud if it can help make a difference.”

And now thanks to this music legend and his 14-year-old friend, this new recording of “Bridge Over Troubled Water” is now available on iTunes and most other music download services for 99 cents, and all the profits are being given to International Justice Mission. Additional contributions are being raised concurrently at www.IJM.org/BridgeToFreedom.