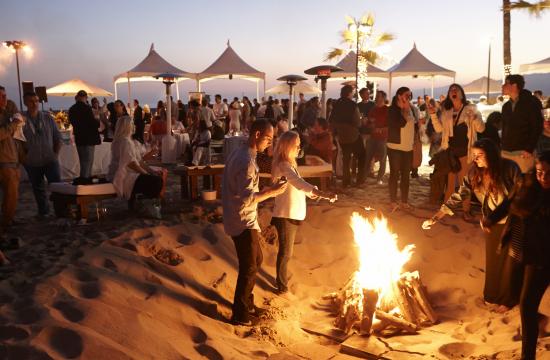 Few tickets remain for one of summer’s premiere food and wine experiences – An Evening on the Beach at the Jonathan Beach Club in Santa Monica – that benefits St. Vincent Meals on Wheels of Los Angeles.

From 6-10 pm on Thursday, Aug. 7, the fifth annual event will feature tastings from about two dozen of L.A.’s best chefs, vintner tastings, specialty cocktails, music, and a crackling fire as the sun sets over the ocean.

Dress is casual, shoes are optional, and proceeds will help to provide the more than 4,000 meals needed to feed homebound seniors and other vulnerable residents across the Los Angeles area every day.

Hailed as “the best party on the beach” by Wolfgang Puck, a long time Meals on Wheels partner, the evening began as part of Puck’s 28th annual American Wine and Food Festival in 2010 and is now celebrated as a single event to capture the allure of a “toes in the sand” food and wine experience.

“We prepare and deliver about 4,000 meals a day throughout Los Angeles,” Twerdahl said. “Our budget of just over $7 million is supported by widespread community support, from individuals, by foundations, corporations, etc. An event like this is not only an opportunity to really raise some good cold cash to support those meals for our seniors, but also it’s an opportunity for us to be in the community and talk a little more about the program and the real essence of the organization and how because of us we have seniors who are being able to age in their homes with really good positive results. We have seniors who aren’t isolated – all sorts of good things come out of being able to feed people, and an event like this helps us raise that money.”

Twerdahl said it was an event not to miss.

“My favorite thing is that if you’re going to live in Los Angeles, you deserve to have an evening on the beach and put your toes on the sand and watch the sun set and act like a Californian,” she said. “There’s great food, great wine, really lovely attendees, and everybody kicks off their shoes and relaxes. It’s the epitome of a California evening as far as I’m concerned. If I could only do one event in the year, this would be it.”

Twerdahl has a 25-year long history with the organization.

“I was a volunteer for 13 years, and 12 years ago, they asked if I would come help fundraise – I said ‘well, you know I can help you fundraise, but not for very long – but maybe two to three weeks while you look to hire someone,’” she said. “That was 12 years ago and you can see that I feel very passionately about the program and the wonderful results that come from that.”

Specialty cocktails will be served by mixologist Marcos Tello, in addition to a martini bar hosted by Jordan Catapano of This Girl Walked into a Bar, featuring Petrossian caviar stuffed olives, Chopin Vodka and No. 209 Gin.

Tickets are $160 (includes parking) and are on sale now through the event website www.eveningonthebeach.com.