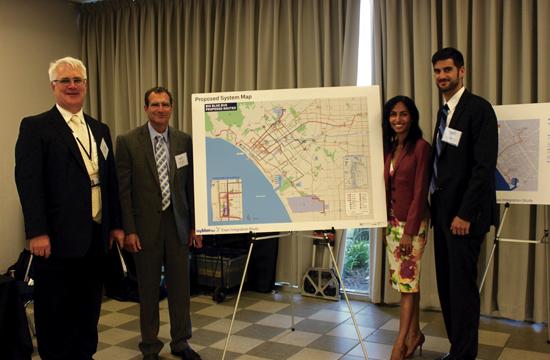 The impending completion of the Metro Rail Expo Line from Culver City to Santa Monica within the next couple of years naturally carries with it a series of subsequent impacts on its surrounding communities. The most apparent change due to occur is the increased appeal of the Expo Line.

With an estimated projection of about 64,000 riders per day by the year 2030, the Expo Line is predicted to assist in decreasing the number of vehicles on local roads and alleviating the issue of traffic.

However, the Expo Line has also catalyzed a more comprehensive analysis of an underlying core issue within the realm of local public transportation: the current status of the Big Blue Bus routes.

As widely used as the Big Blue Bus system is, it has been a while since the efficiency of the present-day routes has been brought to question.

“It’s been 15 years since there has been a comprehensive look at ridership patterns in Santa Monica,” Thomas Wittmann, project manager of the Expo Line integration study at NelsonNygaar said.

“The Expo Line coming into Santa Monica is a dramatic change for mobility for folks across the Westside. The question is: how should Big Blue Bus services change as a result of that? Is the system set up to accommodate that right now? If not, what are the steps necessary to accommodate to the influx of new folks coming in from the Expo Line?”

Big Blue Bus, in alliance with a team of consultants led by NelsonNygaard, is in a sense killing two birds with one stone: not only will a long-needed issue be brought to light, but ultimately the public usage of the Expo Line will be optimized by restructuring its bus system and ensuring that it coincides effectively with the impending rail stops.

In this way, the entire public transportation system will be working harmoniously with each other, with local buses conveniently leading its riders to Expo Line stops (and vice versa).

With the common goal of creating the most convenient interconnected transit system possible, Big Blue Bus and the NelsonNygaard consultant team have recently commenced a research study in order to determine the steps needed to bring their vision to fruition.

“This is an effort in conjunction with [the fact that there hasn’t been a recent comprehensive look at the bus route system],” Wittmann said. “Does Big Blue Bus serve the existing travel patterns and travel markets?”

On Wednesday evening, the second of three community meetings was held at the Santa Monica Civic Auditorium with the hopes of gaining community input and clearer perspective on rider priorities.

At the meeting, Wittmann gave an in-depth presentation on the team’s goals, motives, and research process.

His presentation also set aside a couple of minutes for each proposed route change to give the audience a look at the individual proposals.

Each participant was given a brief opportunity to vote through a small touchpad device on whether or not they held support for each of the route changes, which helped highlight the strengths and flaws of each suggestion.

Wittmann first elaborated on the series of analytic methods the team undertook in order to arrive at the current proposed route changes, diagrams of which bordered the meeting room for easy viewing.

“Every Big Blue Bus route has a recommended change associated with it,” Wittmann said. “We did not make the [proposed route changes] in a vacuum. We had a series of [data elements] that we looked at to help us understand what the conditions were, where growth is happening, and where people will be traveling today as well as in the future.”

The team has been in touch with various institutions and organizations in the area, including the Bergamot station and UCLA, to gain a more accurate idea of ridership patterns. The team has received ridership data from other public transportation systems as well, such as LA Metro and Culver City Bus.

“We also looked at population employment densities and household income,” Wittmann said. He described the end result of all this fact-finding as a “giant jigsaw puzzle”: how could they make the situation better?

As far as local outreach goes, Big Blue Bus and NelsonNygaard released online surveys in 2013 and early 2014, respectively, and conducted a series of public meetings at the beginning of this year as well. Discussion with citizens and individual stakeholders aided in understanding what some of the prominent challenges are within the bus system.

“Any bus-planning effort is difficult, because it will directly affect people’s lives,” Wittmann said. “There’s a huge amount of variance and opinion about the priorities should be.”

Still, it became noticeable that a lack of connectivity between the north and south neighborhoods was an issue across the board.

“It’s known as the First Mile/Last Mile Challenge, because if you live in a certain area of Santa Monica like on San Vicente or Montana, it’s not easy to travel by bus,” Aimee Wyatt, Transit Community Relations Officer at Big Blue Bus, said. “A lot of the services are currently aligned east to west, so by adding more north/south services, we’ll be able to get riders to the Expo Line stations more easily.”

Wittmann also cited “the need for additional north/south connectivity” as a repeated problem that arose among the received feedback.

“The proposed changes looks at creating a denser grid of services and takes away some service duplication,” Wittmann said. “There was a strong desire expressed from multiple groups: better connections to Expo are absolutely essential.”

However, Wittmann as well as other Big Blue Bus and NelsonNygaard representatives repeatedly stressed the tentativeness of the entire plan.

“All of these proposals depend on what the community has to say about them,” Wittmann said. “This plan represents a fundamental shift in how neighborhoods are served. How folks respond to that is open right now. Nothing that you see as a part of these presentations is final.”

The Santa Monica locals in attendance were vocal about expressing their opinions and willing to offer input. The constructive criticism also brought to light some of the potential changes in the route system that still have yet to be made.

There are two provisional phases set so far – to be finished in 2015 and 2016, respectively – but the team is wary of the fact that unforeseen circumstances can and will arise.

“One of the phases includes waiting until Expo opens up,” Wittmann said. “A new set of changes can then be made to better coordinate with Expo. We can predict all we want, but life will always throw you a curve ball.”

To review the proposed changes and share feedback on the Expo service planning, visit http://expo.bigbluebus.com/survey.