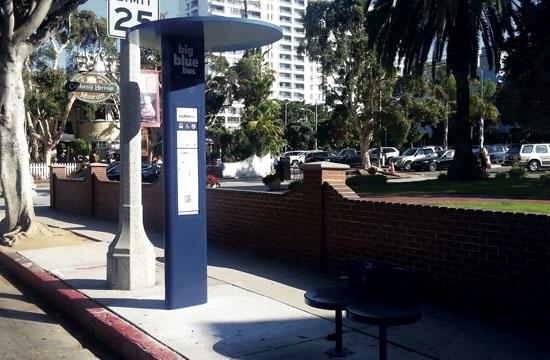 With the completion of some of its new bus shelters around the City, there has been backlash from residents regarding the design.

Debra Mandelkorn, a banker, asks: “What were they thinking? Although they are a beautiful shade of blue they have no function for the person or persons that have to wait for the bus. The seats, what a joke! Two people! And the signage, it’s nice but what about the disk that is covering the sign? What is this supposed to do? What is happening to this City? The design is horrible!”

On Wednesday, BBB announced plans to modify elements of its new Bus Stop Improvement Project design to improve seating capacity and functionality, citing customer feedback as the reason for modifications.

According to BBB, the designs were the result of an “extensive outreach to a great number of stakeholders,” including “riders, City Council officials, business owners with storefronts behind bus stops, business improvement districts, neighborhood associations, and the Santa Monica Convention & Visitors Bureau.”

“While BBB and the City underwent an extensive public engagement process during the design phase for the Bus Stop Improvement Project, making adjustments once the design is built and installed based on customer experience is the mark of a dynamic public engagement effort,” King said.

BBB planned the construction to take place six to twelve stops at a time over a two-year period. Construction of the first six stops began Monday, March 31.

Almost 40 of the low volume stops have been completed to date.

BBB officials added they are looking into altering the existing seat design and looking for ways to “improve the seating comfort and support, potentially through wider seats and higher backs.”

The proposed modifications will roll out during the next few months, BBB officials stated.

“We believe when customers see the full scope of the project installed, there will be a greater understanding of seat and canopy configurations at each stop based on the volume of ridership,” King stated. “We appreciate the customer feedback as it has contributed to improving the design.”