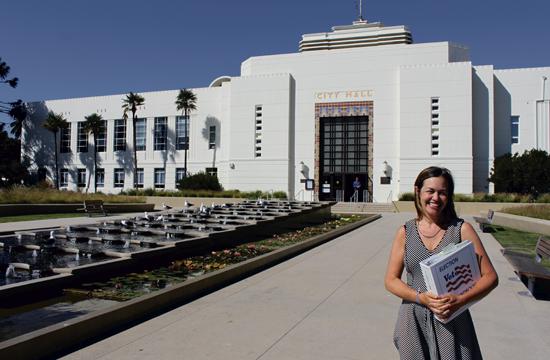 The floodgates officially opened Monday with candidates officially allowed to pull papers for this year’s four local Santa Monica elections, which is highlighted by the City Council race that has three seats up for grabs. By the end of the first day, 11 candidates filed their respective nominations to run for council, with a twelfth person filing on July 15, and a thirteenth on July 17 (see full list below).

A few familiar names populated the first dozen filings, but one potential candidate was glaringly not on the list: incumbent Council member Bob Holbrook. While Holbrook has not yet announced whether or not he will return for an unprecedented seventh term on the dais, he is the only current member of the council who has yet to file nomination papers (both Pam O’Connor and Kevin McKeown filed Monday). However, Holbrook has until Aug. 8 to decide whether he will seek re-election.

If Holbrook does not file for reelection, then that deadline for candidates to nominate will be extended until end of business on Wednesday, Aug. 13.

If Holbrook does decide to seek another four-year term, it will be the first time since 2010 all council members up for election would seek to hold their respective seats. In 2012, both Bobby Shriver and Richard Bloom ended their respective tenures on the City Council, opening the door for Tony Vazquez and Ted Winterer to be elected onto the dais.

Should Holbrook, who was first elected to the dais in 1990, not file nomination papers, this would be the second consecutive election featuring an open seat and a vacuum of candidates vying to at least fill that opening.

Feinstein was twice elected to the council before being ousted in the 2004 election. McKeown and O’Connor are the next two longest-serving council members behind Holbrook; McKeon was elected onto the council in 1998 while O’Connor joined the dais in 1994.

Other candidates might still be added to the list, but at least for the time being there are at least one dozen people running for three council seats in the Nov. 4 vote.

There are already seven candidates in the SMMUSD race, where a new person will definitely fill one seat.

Nimish Patel announced a few weeks ago he is not seeking re-election, meaning he will not join Oscar de la Torre and Laurie Lieberman as incumbents this year.

Santa Monica City Clerk Sarah Gorman encouraged residents to visit the City’s election website – smvote.org – that includes names of people who have pulled papers and will be updated when they are certified.

“That means that the county prints the ballots, handles the polling, and counts the ballots when they come in,” Gorman said. “Essentially my office gives everybody that wants to run locally the paperwork, makes sure the paperwork gets back, and makes sure they qualify. Once we have a listed of qualified candidates, we give that to the County Registrar’s office.”

Gorman said on Thursday, Aug. 14, the Secretary of State draws a random alphabet that’s used to set the order of the names on the ballot.

The Mirror will update who is seeking to run for each of the four Santa Monica races as more candidates file nomination papers between now and Aug. 8.