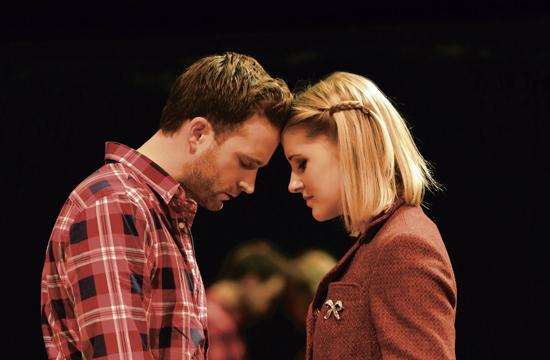 The story of an Irish musician and a Czech immigrant drawn together by their shared love of music opened on stage Tuesday at the Hollywood Pantages as part of a limited four-week engagement.

Once, the celebrated new musical based on the Academy Award-winning film, tells the story of how over the course of one fateful week, their unexpected friendship and collaboration evolves into a powerful but complicated romance, heightened by the raw emotion of the songs they create together.

Brought to the stage by an award-winning team of visionary artists and featuring an ensemble cast of gifted actor/musicians, Once is a musical celebration of life and love: thrilling in its originality, daring in its honesty, and unforgettable in every way.

The 2007 Academy Award-winning film, Once, was written and directed by John Carney, and starred Glen Hansard and Markéta Irglová, with original music and lyrics by Mr. Hansard and Ms. Irglová.

The stage version of Once is a winner of eight Tony Awards including Best Musical and winner of the 2013 Grammy Award for Best Musical Theater Album.

It is recommended for ages 12 and up (in consideration of audiences, no one under the age of five will be admitted to the theatre).

Individual tickets start at $25. Visit www.HollywoodPantages.com or phone at 1.800.982.2787. Tickets may also be purchased in person at the Hollywood Pantages Box Office and all Ticketmaster outlets.

The Hollywood Pantages is located at 6233 Hollywood Boulevard, just east of Vine Street, and the box office opens daily at 10 am except for holidays.

For more information on “Once,” visit www.oncemusical.com/tour.html.