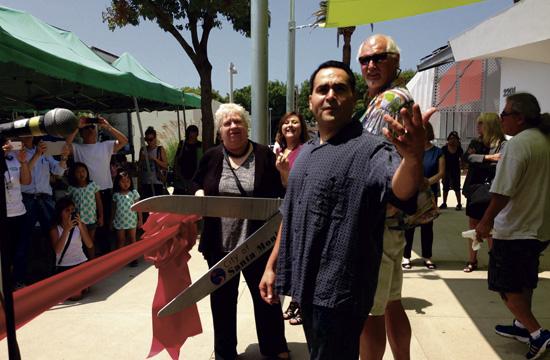 Elected officials, poets, librarians, community activists, educators, architects, writers, community residents, and park and library users gathered together on Saturday, June 28 for a daylong celebration of the opening of the first new public library to be built in Santa Monica in 50 years, the Pico Branch Library.

Oscar de la Torre, Co-Chair of the Pico Neighborhood Association, welcomed everyone in both Spanish and English and recalled a meeting in 2008 called by then City Manager Lamont Ewell, where then Councilman Ken Genser asked “why don’t we put a library in the park itself?”

“Today we celebrate the opening of our library,” de la Torre said. “We celebrate access and opportunity for our young people. We know the value of education and the value of life long learning. Before today we were the only neighborhood in Santa Monica without a branch library.”

He gave tribute to the many community leaders, past and present, who had called for a neighborhood library, citing the 1983 Neighborhood Plan as including a Pico Library.

“The Pico Neighborhood,” said de la Torre, “has the highest concentration in the City of youth and family poverty and the worst statistics of violence in a City Park. Giving young people hope is the number one thing we can do to eliminate violence. This library is the gift of hope.”

Architects Julie Eizenberg and Nathan Bishop of KoningEizenberg and Landscape Architect Andy Sperlock of Spurlock Poirier worked to make sure the library was part of the park, that the building as well as the program would express the neighborhood’s values and hopes.

Sperlock said, “The Pico Branch Library is the first library we’ve done where making the library an indoor/outdoor space works. Normally, because of the security and check out required at the library, the design response to the request for outdoor space is to build an enclosed courtyard.”

With large windows on three sides, an indoor/outdoor work counter, computers everywhere, study and meeting rooms, an exhibition space, and, of course, books in English and Spanish, the library packs a big wallop into its 8,000 plus square feet.

Julie Eizenberg sat inside the library and spoke about the feeling of being part of the park, even from inside the building.

“Libraries have evolved from a place of escape to a place of interaction,” Eizenberg said. “With this building we made as many connections as possible.”

Susan Annett, Santa Monica’s Principal Librarian for Public Services, said the neighborhood response to the library had been a tremendous positive.

“I almost can’t describe it in words,” Annett said. “The neighborhood really worked on this library and their participation created vitality. It was so interesting to see the dynamic unfold.”

Maybe it’s the influence of today’s 4th of July holiday, but I feel quite patriotic about this library.

This library is the hope that Oscar de la Torre meant when he said, “Hope eliminates violence.”

The library represents the hope for education and knowledge, for each person who passes through the library to be able to use that learning to have a more successful and more meaningful life.

The hope is also for the future of democracy; a future that needs its citizens to be educated and knowledgeable if our democracy is to thrive.

The Pico Branch Library is located at Virginia Avenue Park, 2201 Pico Boulevard Santa Monica. It is open Monday through Thursday from noon to 9 pm, Fridays from noon to 5:30 pm, Saturdays from 10 am to 5:30 pm, and closed on Sundays.