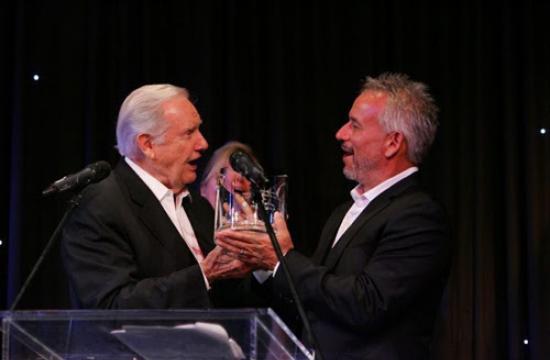 The award recognizes an individual chef or restaurant that has created a dining establishment and experience that effectively marries the culinary arts with the tourism industry.

Lunetta said some of his best travel experiences and memories are related to great food and dining.

“At JiRaffe, I try to recreate the memories I’ve had in my own travel to deliver an authentic dining experience that evokes a sense of nostalgia,” Lunetta said. “I love welcoming that family year after year from Alaska or Europe or Japan who look forward to their vacation in Santa Monica and their one meal at JiRaffe.”

Chef Raphael was honored in 1997 as one of the “Ten Top New Chefs” by Food and Wine and in 2009, received the coveted “Fine Dining Award” from Nation’s Restaurant News.

He is active in his JiRaffe kitchen and is often seen in the dining room welcoming the many guests and friends who are regular customers of JiRaffe. He also co-owns Lemon Moon, a sophisticated eatery in West Los Angeles.

As well as for his work in the kitchen, Raphael is known for his second passion… surfing.

He has gained the title “the surfing chef” as he is often seen on Southern California beaches pursuing his passion and enjoying the ocean.

He was the “surfing chef” guest judge on BRAVO-TV’s popular “Top Chef” television show and has traveled the world as a guest chef at many resorts, on cruises and for culinary events, often combining his talent in the kitchen with his talent surfing the waves.

Raised in Santa Monica, Raphael grew up in a family where food was a focal point at a young age.

His family visited his aunt in the summers in the south of France, where they would enjoy large family dinners in the outdoors: grilling fresh mackerel over open fires made with dried grapevines, eating calamari and using fresh herbs, olive oils and vegetables native to this fertile region.

This setting and many of the foods he experienced began Raphael’s love for light, simple French cooking.

“Raphael’s dedication to sustainable cuisine continually showcases Santa Monica Farmer’s Market produce at its finest,” Kerns said. “This is why his restaurant has been a Santa Monica favorite with locals and visitors alike for over 18 years.”