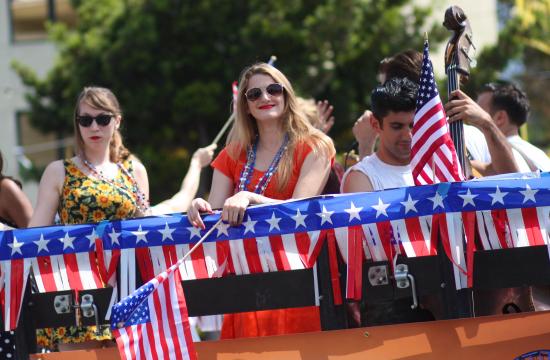 For the eighth year in a row, the Ocean Park Association will host its annual 4th of July Parade starting at 9:30 am Friday along Main Street in Santa Monica.

Floats, music, horses, vintage fire trucks, and much more will entertain spectators as part of the “May the 4th Be with You” theme.

In addition to red, white, and blue, the parade will offer unique and creative décor and costumes this year.

The parade theme is also reflected in this year’s Grand Marshal as OPA honors former Santa Monica Mayor Nathaniel Trives who has worked tirelessly for the Santa Monica community – and with as many titles that he’s held over the years, “Mr. Santa Monica” truly proves that imagination and vision have no bounds.

Beginning at 9:30 am the 1.5-mile route will take the parade from Pico Boulevard and Main Street, south on Main, turning west on Marine Street and onto Barnard Way, concluding south of Ocean Park Boulevard.

Viewers are encouraged to sit along the Main Street route and walk or ride their bikes to the route to help achieve a more environmentally friendly parade.

Come early before intersections are closed and get a curbside seat to watch all the festivities. Parking will be available at the Civic Center structure (4th Street and Olympic) for $5.