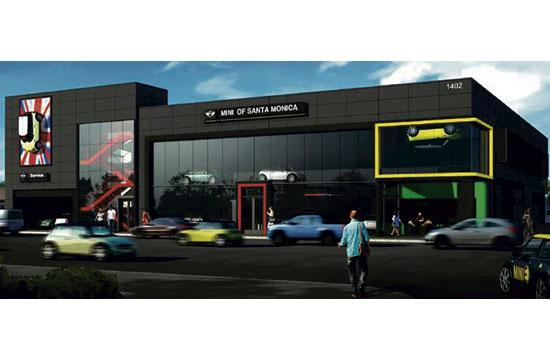 A rare moment occurred at Santa Monica City Hall on Tuesday night. A development agreement (DA) bringing more vehicles to Santa Monica was not only approved, but no one opposed the project on its actual merits.

Perhaps the only real negative of what will be the first MINI dealership on the Westside is the vehicles sold or leased from there would not help local residents handle Santa Monica traffic the way a monkey handles coconuts.

Beyond being the first MINI dealership on the Westside – the next closest one is near downtown Los Angeles – there were a couple of other notable landmarks accomplished by the latest venture to arrive in Santa Monica.

Attorney Paula Larmore, who represents the applicant bringing the MINI dealership to the city, told council members this is the first project in Santa Monica where a DA governs an automobile dealership.

Also, MINI Santa Monica has also achieved rare air in environmental circles, as the new dealership is aiming to achieve LEED Platinum status, a level usually not in the crosshairs for an auto dealer.

“This is the kind of project the LUCE envisions and really encourages,” Larmore told the council.

A few other statistics: the total project size proposes to be 33,400 square feet and 35 feet high, with plans for 6,144 square feet of sales floor and offices, a café, 21 service bays, and 135 parking spaces. City staff added the proposed MINI dealership would generate about $494,000 of sales tax revenue each year.

All of the above is the good. What is a council vote on a DA without at least one significant concern being raised?

While the council and a handful of speakers during public testimony were very pleased about the terms of the DA and excited to see MINI arrive in Santa Monica, one local resident told the council she was forced to move out of her apartment thanks to the demolition of that gas station that once sat where the automobile dealership will soon occupy.

Elaine Antonio lived in the apartment building adjacent to the Unocal 76 gas station at Santa Monica Boulevard and Fourteenth Street for 20 years. When the gas station was grazed to make way for the MINI dealership, Antonio told the council she vacated her apartment and moved elsewhere due to what she believed were a series of nuisances occurring during the demolition.

Antonio had the council’s ear, so much so that what probably would have been a 20 minute deliberation before the votes were cast turned out to be nearly a full hour of discussion, mostly chatter of how best address Antonio’s grievances.

Telling the council she has been trying to come to terms with Quinn Automotive Group, the owner of the impending MINI dealership, since February, Antonio said she had her first settlement discussion with the applicant the morning before this week’s City Council meeting. She also presented phone records as evidence corroborating her claim that she had consistently tried – with no avail – to reach out to the Quinn team to have them resolved the issues she raised prior to her moving out.

Finally, Antonio said she was reached out to in order to discuss a settlement in hopes to avoid the courtroom. However, Antonio told the council she was offered one-third the “modest amount” she requested.

The council was empathetic to Antonio’s situation but also felt there was not much the elected body could do resolve her grievances with the Quinn Automotive Group.

Council member Gleam Davis, for example, said it was not really the elected panel’s place to be the fact finder and arbiter of who was right or wrong, especially since the matter appeared to being “settled in another forum.”

Ultimately, Council member Kevin McKeown used Antonio’s situation to direct City staff to ensure potential grievances of other tenants are kept to a minimum during the construction of the MINI dealership and that residents would always have an avenue to voice their concerns whenever they might arise.

“Anybody who comes to our town and wants to run a business had better learn that we take our residents seriously. We want them respected,” McKeown said. “If you are getting phone calls from upset residents, I hope you’ll return them. If you are a resident who’s upset and you’re not getting a response, I’m in the phone book. I’ll be happy to talk to you.”

With McKeown’s assurances, the MINI Santa Monica dealership was given the green light with the hope that the only corners cut are by a MINI driver, not the developer.