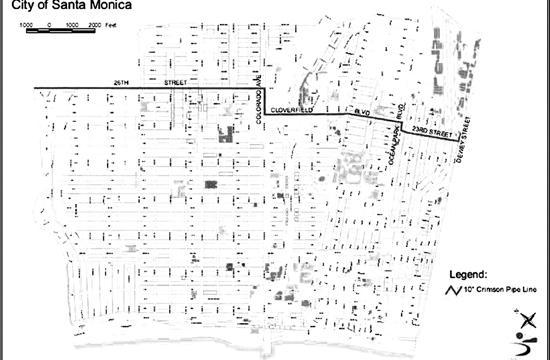 About four miles of pipeline that runs underneath Santa Monica and carries crude oil will continue to operate through at least 2024, thanks to a franchise agreement the City Council unanimously approved July 8.

The renewed franchise agreement authorizes Crimson California Pipeline to continue using the underground tube, which is 10 inches in diameter, to transport oil north and south through Santa Monica, between Ventura County and the Wilmington neighborhood of Los Angeles.

In all, the pipeline covers 89 miles. Only about 3.9 miles of the pipelines passes under Santa Monica.

According to City staff, the pipeline has been in operation since 1941 and is heavily regulated by the State.

The pipeline essentially runs close to the City’s eastern border, traveling underneath 26th Street until Colorado, where it turns west until Cloverfield Boulevard and heads south again. At Ocean Park Boulevard, the pipeline again meanders west to 23rd Street, where it turns south toward the western edge of Santa Monica Airport. The pipeline then turns east along Dewey Street as it exits Santa Monica and into Los Angeles.

Council member Kevin McKeown, the only person to speak on this item during the public hearing, said had him and his colleagues been voting on whether a pipeline should be built, the conversation might be different. Alas, the vote was simply whether to renew a franchise agreement, an act the council really had very little choice.

According to City staff, had the council voted against the franchise agreement, Crimson, in its capacity as a State-regulated common carrier pipeline utility, would be able to exercise eminent domain and other granted rights to ensure the pipeline could continue to operate through Santa Monica.

In exchange for granting the franchise agreement, Santa Monica would receive $103,085 per year for the duration of the agreement, including $83,085 annually as a franchise fee and $20,000 annually for administrative costs.

Crimson took over ownership of the pipeline in 2005. Earlier this year, Crimson had sought to enter into a 20-year franchise agreement with Santa Monica. However, the council in March voted to renegotiate terms with Crimson, hoping to reduce the length of the commitment to 10 years.

Had the 20-year term been approved, the franchise agreement would have expired a few years shy of the pipeline’s 100-year anniversary. A 10-year term would conceivably give the City some flexibility to look at the state of the pipeline then and determine whether or not it is safe to continue allowing it to operate underneath Santa Monica.

The tradeoff to agreeing to a shorter term: Santa Monica receives a lesser franchise fee. The 20-year franchise agreement would have yielded City Hall an annual franchise fee of $148,705.

Crimson maintains a $45 million aggregate insurance policy on the pipeline. According to City staff, the firm would be financially responsible for any spills or releases from the pipeline.