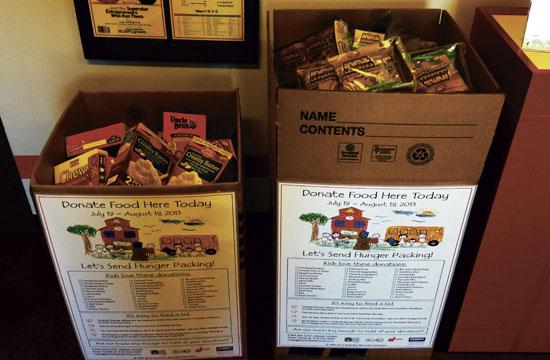 “I just can’t hear the statistics that almost 700,000 children in Los Angeles and one out of every five children in Orange County are at risk of being in hunger every single day without literally becoming sick to my stomach,” McHolm said.

This led her to create and launch the Los Angeles and Orange County summer food drive competition, which is currently in its second annual run.

McHolm, who is the co-founder of NorthStar Moving Company, teamed up with Coldwell Banker Residential Brokerage to produce the event entitled “Let’s Send Hunger Packing.”

Santa Monica Coldwell Banker Residential Brokerage offices are competing against other cities and towns to collect the most food donations for their local food bank.

“I really feel like before I heard those statistics I was unaware,” she said. “I knew that there was a problem but I didn’t have any idea the extent.”

The event is held during the summer because the meal schools provide at lunch can be the only meal some students have access to.

“School closes for the summer and then they don’t have even that one meal,” McHolm said.

McHolm said she has large goals for this year’s drive.

“Last year we raised over 2.5 tons…  I would love to double that,” she said. “My ultimate goal is that we never have to have another food drive – that kids are just fed – but until we are in that place we are dedicated to helping any way we can.”