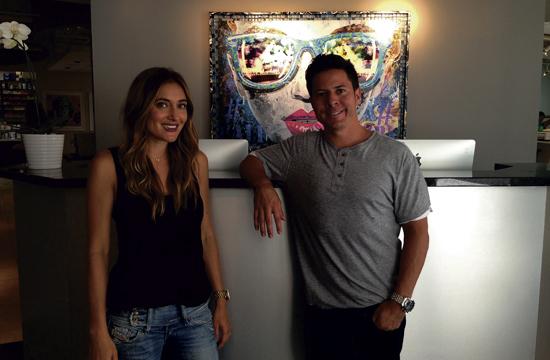 After working together at Fred Segal Salon for several years, Hilary Smith and Richard Saulino decided to join forces last November to open their own salon on Ocean Avenue called Saulino Smith Salon.

“We wanted something high-end and comfortable so we went out of branch and built it,” Saulino said.

After the pair found the location, six employees from Fred Segal Salon decided to join them on their new venture and work at the salon.

Smith said everybody who decided to work for them already had clientele in Santa Monica.

“We knew that we would be opening a salon with a strong base of clients that were in the area,” Smith said. “Along with the stylists, we also had an esthetician from Fred Segal come along and she already had a clientele.”

The environment in the salon is one they feel is warm and welcoming.

Smith said she attributed some of this to the age of the stylists.

“We are fairly young,” she said. “We are all in our early 30s or late 20s. It’s just a young vibe and everybody gets along really well. It’s a non-drama salon which is really nice.”

“I think that’s what separates us from any other salon in Santa Monica is that you walk in and you feel the good vibe and the good energy,” he said. “There are no egos, and it’s just a very comfortable place to be in not only for the stylists but for the clients as well.”

Smith said that Locke was not a typical spray tan administrator.

“Instead of your typical spray tan which for a lot of people it can have a negative connotation with being smelly or orange, it’s very natural,” Smith said. “It’s customized to your own body so she’ll contour where you need contouring (she can give you some abs) and it’s a very clean feeling and looks really natural.”

Smith said the salon had created a partnership with the Jeanie Madsen Art Gallery next door.

“When we moved in [the gallery] had us come over and basically just look through all of the art and pick out the pieces that we thought represented our salon the best,” Smith said. “We kind of went for the Hollywood beach vibe so they kindly allowed us to fill up our salon with art for which we feel very lucky. All of the pieces are for sale except for the one above the front desk. She refers us clients and we refer her clients; it’s a cross promotion.”

Saulino said the salon’s focus was all about the client.

“We want them to give themselves a very high-end experience without having to go to Beverly Hills,” he said. “We want to bring something that I feel like Santa Monica is missing; something with new energy, something where you can come in and feel at home.”

Saulino Smith Salon is located in the Pacific Plaza at 1431 Ocean Avenue, Suite B, Santa Monica.