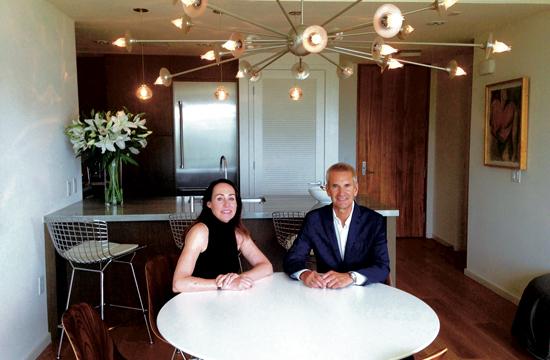 Ocean Avenue South, a 3.7-acre site a block away from the Pacific Ocean, contributes two luxury residential properties to a block of coastal apartments and condominiums: The Waverly and The Seychelle, with the former finally having opened its doors to tenants last month after years in the making.

Related California, the developer behind the project, initially signed a contract back in 2007. Though the project underwent a hiatus due to the 2008 economic crisis, Ocean Avenue South was thankfully able to persist through the bumps in the road and welcome its first residents to The Waverly.

The Waverly consists of 65 residences and is split among six-story high West and East buildings that are connected by a skybridge lounge.

Meanwhile, The Seychelle is a 10-story structure that offers 93 residences. In total, Ocean Avenue South is comprised of 158 residences, with options of one-, two-, and three-bedroom layouts, including 11 penthouses. The overall vision also incorporates upscale retail stores and restaurants, as well as public walkways with easy access to the Santa Monica shore.

Rob Evanko and Karen Baker are among The Waverly’s very first residents. They currently reside in a one-bedroom layout, which is appropriate for the couple: Evanko and Baker recently sold their home in Venice with the desire to downsize and avoid the maintenance and construction that often comes alongside owning a house.

The couple moved in early last month, just two days after the condos were announced open to tenants. The couple attributes their choice of residence to Santa Monica’s prime location.

The convenience and cleanliness of the city was what drew them to the Waverly.

“We don’t have to drive as much anymore,” Evanko said. “We’re able to walk everywhere.”

Main Street and Third Street Promenade are among the pedestrian shopping hotspots that the location of Ocean Avenue South is able to provide unrivaled access to. The couple also listed a handful of restaurants that they easily frequent.

“It’s in the middle of everything,” Baker said. “We can walk to the gym in the morning or run on the beach.”

Tongva Park – which was designed by the same mastermind behind the famous High Line in New York – is also located right across the street. It is the most prominent point of interest seen from the couple’s balcony.

The services that The Waverly provides were among some of the available amenities that the couple raved about.

“We had a housewarming party here last weekend, and even though our apartment was a little small to fit 30 of us, there is a great community room available on the fifth floor,” Evanko said.

The skybridge lounge, which can also double as a multi-purpose room to host larger groups, also offers a view of the ocean from its outdoor patio. In addition to lengthy tables and several seating areas, the lounge boasts a fireplace, viewing deck, barbecue, and fully-equipped kitchen.

“The usage of the room is free for tenants,” Baker said. “All we have to do is reserve it.”

Another added bonus is the quality service that the concierge, who attends the lobby at all times, provides to both the Waverly’s visitors and tenants. The concierge checks guests in, calls the tenant to notify them, and escorts the guest up to the respective floor.

According to the couple, the unit can also receive packages and other mail orders for tenants, which offers further convenience to those who are out and about for the majority of the work day and are unable to retrieve their mail parcels.

“Living here has been easy, safe, and clean,” Baker said.

Other amenities that both The Waverly and The Seychelle feature include a fitness center, a pet spa, and retail outlets on the ground level.

The Seychelle also offers a business center and rooftop oasis with a pool, jacuzzi, and cabanas.

As noted, the Waverly began move-ins within the first few days of June. The number of people who have taken residency remains in flux, with a current estimate of about 10 tenants.

The Seychelle sales have started, with move-ins commencing later this month.

The plaza level of The Waverly will welcome Joan’s on Third and Starbucks, while The Seychelle will host Searsucker’s first location in Los Angeles.

“Each partner will bring its own unique offerings, from a sophisticated sit-down dining experience and a gourmet marketplace and delicatessen to a premium neighborhood coffee house,” Canori said.

Originally opened in 1998 as a catering company on Third Street in Los Angeles, Joan’s on Third blossomed into a Los Angeles culinary landmark.

Family-owned and operated, the company offers an extensive gourmet marketplace, delicatessen and full-service catering and event planning company. The Santa Monica location is slated to open in late 2014.

Joan McNamara, founder of Joan’s on Third, said they couldn’t be more excited to join the Ocean Avenue South neighborhood later this year.

“We love our customers and always welcome them with delicious food and excellent service in a warm atmosphere,” McNamara said. “Ocean Avenue offers the attention to detail and quality that we provide our guests every day.”

Hakkasan Group said it was pleased to introduce Santa Monicans to the Searsucker concept, which is known for its adventurous spin on New American classics.

With locations in Austin, San Diego and Del Mar, CA, Searsucker’s Santa Monica location will feature a menu of unique twists on classic home-style dishes, paired with a lively ambiance that will encourage guests to stay long after their meal is enjoyed.

“Today, Santa Monica is seeing so many exciting design, real estate and tech developments, creating a playground for both the business professional and creative dreamer,” Brennan said. “I see the opening of Searsucker as an extension of this blueprint and look forward to making our guests feel right at home in this idyllic location.”

Starbucks will bring its premium coffeehouse experience to The Waverly with its new “Evenings” concept serving its Starbucks Reserve coffee and, after 4 pm, wine, beer, and small plates.